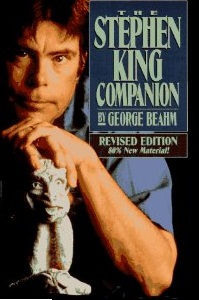 In 1995, George Beahm offered a massive revision of his 1998 Stephen King Companion.  The changes are so significant, I think it counts as an all together different book.  The cover boasts "80% new material."  I think that's conservative!  Some formatting is the same, but the content is vastly different from the original work.

As with the original, I like this offering very much.  It does not hold for me the charm of the original, since I only recently purchased it, so much of it was already outdated.  What took me so long?  Well, first I didn't know it existed.  then I doubted it could really be all that "new."

My friend, Bryant Burnette, put his finger on the real joy of these books about Stephen King in his recent response to a post.  Burnette wrote, "In the internet age, it is easy to forget -- or to never know in the first place -- just how difficult it could be for fans to learn about their favorite artists. It doesn't make either of us sound old to point that out; it just makes us sound like we accurately remember what the world used to be like before the Internet made information-gathering so much easier. (For the record: it's better WITH the Internet; there was a lot of charm to be had in finding books like Beahm's, but I'll take the way we do it today every time!)"

Even in the age of super-high-speed Internet, I still love the companion books.  All of them!  How are they different from websites?  Well, websites release the most current news, one blurb at a time.  There is something special about sitting and reading article after article by various authors about Stephen King's work.

The format is the same as the original.  However, besides that, it is largely a brand new book (brand new in its time, that is).  One of my favorite parts is the short book by book summery and analysis by Michael R. Collings.  Unlike the previous companion, which presented this information in alphabetical order, this book is chronological.

The book has so many sections written by different authors, it appears Mr. beahm served primarily as an extended editor.  I like this, as it allows different people to speak in the area of their expertise.


Naturally, interviewing Barker was a priority for the original version of the Stephen King companion, but his schedule was such that when we finally conducted the interview -- by phone, long distance from Virginia to London -- the Stephen King Companion's contents had been finalized, and the following interview could not be squeezed in, making an already big book even bigger.

What was cleaned out of this edition appears to be primarily contact information that would quickly become outdated (addresses, phone numbers and so on).  It actually makes the book feel more professional!

There is also a nice interview with Start Tinker of Betts Bookstore.  Beahm and Tinker would later work together to produce a book titled "Stephen King Collectibles."