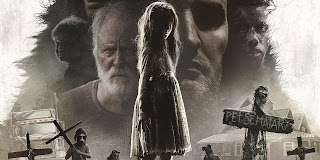 This is not a review.  It’s my discussion points on the movie Pet Sematary.

If you haven’t seen the movie – see the movie.  If you need to be told not to read spoilers before you see a movie, you’re seriously reading the wrong blog.  Everything here is about what’s on the screen.

The new Pet Sematary takes us down old familiar roads while offering generous doses of new scenery.  Or, so it would seem.  The movie begins with familiar setting, familiar family, familiar plot line.  A doctor and his family move into a small college town in Maine to get away from the busy life and have more time with their kids.

About the time the viewer thinks they know what is going to happen, the movie pulls the rug out from under you.

The changes are considerable, deep, and the results are an almost entirely new story.  A scarier story.  In fact, a much better story.

1. Ellie not Gage.
The most striking change is that it is Ellie who gets whacked by the truck.  This is the most important part of the rewrite because it changes the tone and direction of the entire movie.  In the original, Gage was so small, he couldn’t talk.  The result was, he simply became a killing machine.  It was fun, if not a little hollow.  In the new version, Ellie comes back aware that something has happened to her.  She is flat out creepy!  And evil – Very evil.

By replacing toddler Gage with 9 year old Ellie, the viewer is given something very important: Conversation.  Sweet moments with Luis after Ellie comes back.  She is more than a little aware that things are not right.  The story has the courage to take us where we’ve often wanted to go – but not one has really gone.  How do you handle your child coming back from the dead?  What do you tell the neighbors?  Or your spouse?  It’s Ellie who asks this question of Luis.  “What are you going to tell her, Daddy?” Ellie asks.

Ellie is old enough to dress herself.  This is important when she chooses to take off her clean clothes and opts instead to wear the dress she was buried in.  Again, creepy.

Ellie is also old enough to communicate where she went when she died.  And it wasn’t heaven.  This, of course, brings up all kinds of theological discussion points.  Do 9 year olds go to hell?  I think not.  But then again, mot 9 year old’s don’t get buried in an ancient burial ground and raised from the dead – so go with it.  She becomes a messenger of hell itself, ready to carry her entire family down into the grave with her.  Her murders are given motive beyond just the ground being “sour.”  By killing her family, she is actually reuniting them. Yeah – that’s a little twisted.

2. Pascow:
I never felt right about the ghost of Psacow in the original movie.  He was too present.  Too much – there.  The new movie makes him much more ghostly.  It worked far better making him appear, disappear and hang more at the edges of scenes instead of dominating the center stage.

3. Teasing.
The movie teases older viewers who remember well the final moments of Jud Crandall.  In the original, Gage slices his ankle.  Using almost the exact same camera angle as Jud walks through his house, the viewer prepares for the attack – which doesn’t come quite as expected.

Here’s some stuff they could have just as well left alone:

1. Zelda -- The death of Rachel’s sister.  This storyline was way overplayed.  Dreams, visions and memories all surround the death of Rachel’s sister.  And the story-line gets played over and over.  It becomes like a broken record.  What is supposed to feel deep with each callback really becomes tiresome.  Give it up and get back to the main story.

Rachel comes across kind of like Jack in the Shining -- a little crazy from the get go.  Not just broken or grieving; she's nuts.  Rachel suffers from visions that take her out of reality.

2. The end.  The ways things finally play out, make the movie more of a zombie flick than – well, whatever Pet Sematary originally was.  It ends by taunting the viewer, but not really providing any answers.  The movie loses its depth by being a little silly with its ending.  Really, no one is taking this too serious, anyway, right?  But, the fright is lost in the absurdity of the final frames as the dead family members approach the car Gage is locked in.  Will they get him?  Of course they will.  And then what?  They storm the country killing people and burying them in the ancient burial ground?  It just becomes Night of the Living Dead.

3. The funeral.  A major cut in the film was Rachel's parents.  In both the book and the movie, the tension between Luis and his inlaws is an important emotional subtheme.  I thought the original funeral scene, where Luis and his father in law go after each other, only to knock the coffin over and the body come spilling out was brilliant.  That all goes away here for a much more subdued funeral scene.  (I would say: Give us the fighting funeral back at the expense of the corny ending.)

My final grade: A-

(I enjoyed THIS article on the major differences between the two movies)
No comments: