Under The Dome and The Cannibals 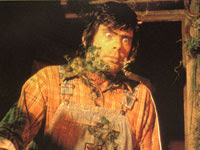 I'm reposting this because it's interesting to me -- and adding some new info.
.
Stephen King has stated this is upcoming novel Under The Dome is really his third attempt at this story. The previous titles were The Cannibals and Under The Dome. In the Art of Darkness, King states, "I worked on a book called The Cannibals–I had started it five years before, but it was called Under the Dome then. It didn't get finished either time."
.
So what can be known about this unfinished novel? According to Stephen Spingensi's The Lost Work Of Stephen King, The Cannibals is about 100,000 words hand written novel. Spingensi reports that it was written while King was on the set of Creepshow. Remember King in Creepshow? The picture above is King in character on the set of Creepshow. Somehow the idea that he was thinking about Cannibals at the time seems totally believable!
.
What is interesting about The Cannibals is that it was written in 1983. King was already a successful author. This is not just stuff from his highschool days that he dumped, it was the serious work of a published author.
.
King told douglas Winter in the Art of Darkness, "I've got about four hundred and fifty pages done and it is all about these people who are trapped in an apartment building. worst thing I could think of. And i thought, wouldn't it be funny if they ended up eating each other? It's very, very bizarre because it's all on one note. And who knows whether it will be published or not."
.
Without having read The Cannibals or Under The Dome, I can only mention on the surface a major difference appears to be that The Cannibals limited itself to an apartment building, while Under The Dome is set on the landscape of an entire town (Chester's Mill).
.
September 13, 2009 Update: Scribner has stated that an except of The Cannibals will be released on September 15th. It will be posted on stephenking.com. Obviously I'm interested in the original story -- but of geater interest is always the finished work that has the authors approval.

Email ThisBlogThis!Share to TwitterShare to FacebookShare to Pinterest
Labels: Creepshow, Douglas Winter, The Art Of Darkness, The Cannibals, The Lost Work, Under The Dome