.
.
1. Of course, Under The Dome comes out this fall.
.
King has promised a real treat to readers with a long novel mirroring themes from The Stand. His recent publication of the first pages of The Cannibals has only served to get me more excited about Under The Dome. This, hopefully, will prove to be vintage King. You know, the guy who gave us The Stand The Shining, IT. . .
.
2. Liljas Library
.

has a book coming out. Published by Cemetary Dance, this book should be very interesting. Hans-Ake Lilja probably has the best fan site there is. He has features on most of the books, including books about King, and an up to date front page that runs Stephen King news. He's also good at citing sources -- which is appreciated.
.

3. Bev Vincent's Stephen King Companion
also comes out this fall. I really don't now what to expect of this -- except he has promised it would be "different" from the others.
.
So here's some of the things that we do know will be included:
.
.
Table of contents for Vincent's Companion:
.
Introduction: Mr. Horror USA
Chapter 1: The Early Years
Chapter 2: Room 217—The Shining
Chapter 3: The Walkin’ Dude—The Stand
Chapter 4: Welcome to Castle Rock—The Dead Zone
Chapter 5: Sometimes Dead Is Better—Pet Sematary
Chapter 6: Pennywise Lives—It
Chapter 7: Number One Fan—Misery
Chapter 8: The Night Journey—The Green Mile
Chapter 9: Things That Go Bump—Bag of Bones
Chapter 10: The Accident
Chapter 11: More Worlds Than These—The Dark Tower series
Chapter 12: The Thing with the Endless Piebald Side—Lisey’s Story
Conclusion 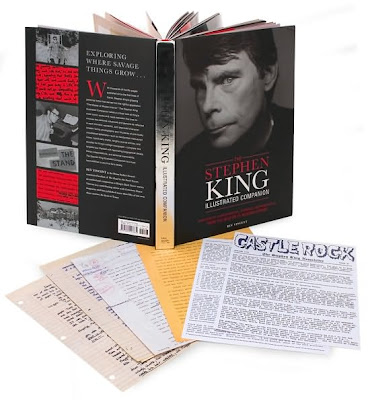 Email ThisBlogThis!Share to TwitterShare to FacebookShare to Pinterest
Labels: Bev Vincent, Lilja's Library, Under The Dome