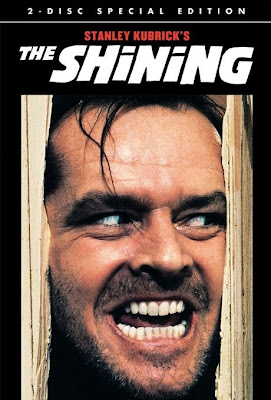 The Shining, 1980
.
Funny factual error: There is no way that the huge pile of the Torrance's luggage (as seen when they first arrive at the Overlook) would fit in a VW Bug. (From imdb)
.
Deleted Scene: Roger Ebert reports, Near the end of the film, on a frigid night, Jack chases Danny into the labyrinth on the hotel grounds. His son escapes, and Jack, already wounded by a baseball bat, staggers, falls and is seen the next day, dead, his face frozen into a ghastly grin. He is looking up at us from under lowered brows, in an angle Kubrick uses again and again in his work. Here is the deletion, reported by the critic Tim Dirks: "A two-minute explanatory epilogue was cut shortly after the film's premiere. It was a hospital scene with Wendy talking to the hotel manager; she is told that searchers were unable to locate her husband's body. http://rogerebert.suntimes.com/apps/pbcs.dll/article?AID=/20060618/REVIEWS08/606180302
.
Personal Notes:
Watching Kubrick's The Shining tonight (uh. . . after church) -- and I find myself surprised at how much I like this. I've seen it several times, but usually find myself disappointed it's not more like the book. ut tonight I find myself noticing things that are really spooky -- thng's I've missed in previous viewings.
.
Why is Jack crazy?
.
The slow breakdown of the family is lost, since Nicholson begins the story pretty insane. But, then, Shelly Duvall spends most of the movie whining at a very high pitch. I think she's the one who's pretty insane -- or perhaps the cause of Jack's insanity. Find myself thinking: Could this lady seem a little more out of control? A little more needy? Could she possibly lose it just one more time?
.
Shelly with the basebal bat is pretty scary. She is backing away from jack -- UP a stair case -- lamely batting at him to keep him away. This can only end well, right?
.
Watching Shelly act crazy in every scene makes me think that maybe none of this is going on in Jack's head. . . maybe she's the one hallucinating.
.
Novel verses Movie -- A Hopeless Comparrison:
What's frustrating is how illogical some of this is. Since Kubrick doesn't believe in ghosts, it's all happening in Jack's head. But the ghosts know things Jack doesn't seem to know. . . so is the place haunted, or is Jack just crazy? If Jack is just crazy, how does he know Danny is using his ability to contact the outside? And if the ghosts are in Jack's head, why does Wendy see them? And Danny?
.
Let's say up front, this movie bears very little resemblance to the Novel. The novel IS logical, since it is very upfront atht this is not just about Jack going crazy -- the Overlook is actually haunted. Ah-ha! With that premise, everything works!
.
Creepshows author Stephen Jones explains why the novel and movie are so different: "Kubrick and Johnson attempted to craft a script that would avoid any comparison with the then-current glut of supernatural films flooding the boxoffice. 'The problem was to extract the essential plot and to re-invent the sections of the story that were weak,' Kubric told Ciment. The director believed that the virtues of the book lay 'almost entirely in the plot' and the two collaborators made a list o the scenes they thought should be included, which they shuffled around until Kubrick approved of the order." --Creepshows, p.19-20
.
Those who truly love the novel are doomed to be disappointed. Note the emotion the novel stirs in fans like Kev Quigley at charnelhouse have to say about the novel: "Many of King's later novels -- IT, Misery, Pet Sematary, Dolores Claiborne, and The Dark Tower series as a whole in particular -- have been significant achievements in both King's oevre and in the modern literary world collectively, but The Shining is where King reached his pinnacle of terror. Not even the dark Pet Sematary could match the sheer force of the horrors, both real and spiritual, of King's masterpeice The Shining. If you've never tried King before, and want to know if all the hype is true, start here. You won't be disappointed." http://charnelhouse.tripod.com/shining.html
Now. . . with passion like that (and he's right) there is no way a movie can produce that kind of emotion.
.
What I like:

One final thought. Though I like this movie a lot, it fails to produce any real deep fear. It is unnerving on some psycological level -- Kubrick is a master at getting you off balance -- but it's not scary.

In a good horror film, forces are at work that could threaten any of us. But in the Shining, ultimately it's not about a haunted hotel that any of us might visit -- it's just about Jack's craziness. So it turns into little more than a new version of the cut-em-up and chase film. But Danny is not threatened by ghosts or any evil deeper than that which is rooted in Jack himself.

Oh yeah. . . nice of them to keep the lights on in the hedge maze all winter, just in case someone wants to take a stroll through a snow filled hedge maze!