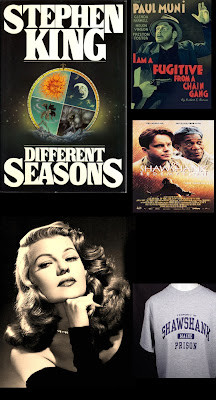 Finished reading Rita Hayworth And The Shawshank Redemption. I've seen the movie several times, and enjoyed the novella very much. A few short notes on the story.
.
Title:
The book uses the name "Rita Haywroth" while the movie is only titled "The Shawshank Redemption." The audio is also only marketed as "The Shawshank Redemption." Of course, Rita Hayworth has a very important role in both the movie (where she is actually given screen time) and the book. Rita Hayworth was a movie star who rose to fame during the Great Depression. http://www.imdb.com/name/nm0000028/
.
The narrator:
Probably the thing I liked least about the book was the narrator. Red is locked in a prison cell, so the story relies more on his ability to pick up bits of gossip than on first hand information. This gets really wild when the actual prison break takes place. He's not there! So how Andy got out is left to Red's imagination. The constant guessing instead of story-telling gets tiresome.
.
Of course, in the movie, this isn't a problem! Because the movie isn't locked in to Red's point of view. It is able to pull away. By the way, in the movie Red was masterfully played by Morgan Freeman.
.
I did enjoy Red's recital of various prison breaks. And I also enjoyed it when the story seemed to end, then picked up again. Since I was listening on CD, this actually caught me by surprise since I didn't know how many pages were left.
.
The book is more a tale of escape than the more complicated elements of revenge that the movie introduces.
.
The Whistle
As noted in a previous blog, Shawshank bears similarities to Escape From Alcatraz. King, via the narrator Red, mentions that in the movies a whistle always goes off when there is an escape. Well, I was watching "I am a fugitive from a chain gang" (1932) in which there are two prison breaks. The first time they are in a field, so there is no whistle to go off. Instead the score itself blares with trumpets -- making almost the exact sound! The escape in that scene is brilliant. Later int he movie there is another prison escape, and sure enough, the whistle goes off. (By the way, Shawshank has a much better ending)
.
The writing
The first person narrative also tends to talk over the story, instead of building it scene by scene, the way King usually does. I actually like this kind of writing, since it is more direct. King is good at making decades slip by in this book, without feeling like they've just been skimmed by. He doesn't belabor the time elements, but as time passes the reader feels it go by. The reader ages with the characters.
.
What I liked:
1. The story is great.
2. The writing moves the story forward at a pretty fast pace.
3. The movie. I think the movie advanced the story in some very key ways, actually making it better.
4. I listened to this on CD. I really liked the reading by Frank Muller. He is absolutely awesome! Audio file says, "Muller's flawless reading enriches King's powerful story, providing a superlative audio program."
.
Editions:
1983, a story in Different Seasons.
1983, a large print book.
1995, a audio recording.
1994, a major motion picture.
.
See my post: Escape From Alcatraz & The Shawshank Redemption here, http://talkstephenking.blogspot.com/2010/09/escape-from-alcatraz-and-shawshank.html