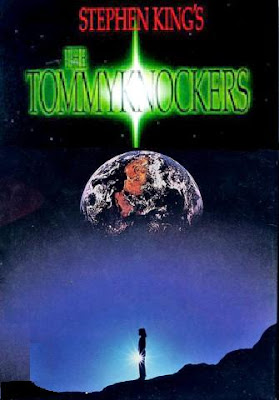 .
As I read Under The Dome, I find myself thinking how much it is like The Tommyknockers. Of course, in the Tommyknockers, something just didn't work. People have mentioned several times that King was high while he wrote this -- I don't know. But he also wrote Misery in the same time period, and it worked.
.
It wouldn't be until Needful Things that King would really pick up his pace again and write a novel with large cast. But with Needful things, things worked!
.
In a many of ways, Under The Dome seems like The Tommyknockers Redeemed.
.
Note:
.
1. Length: Both are very large novels.
.
2. Genre: Both are essentially Science Fiction. Though a King Novel always defies genre. Fundamentally, it doesn't matter if the problem is a Dome or a spaceship, the real story is the people.
.
3. Large Cast: King stopped writing The Cannibals because he says it was hard for him to handle such a large cast of characters. I think that accounts for a lot of the rambeling in Tommyknockers. But by the time Under The Dome was written, he had Needful Things under his belt, and a large cast wsan't such a problem. A story about an entire town.
.
4. Degenerating Circumstances: In Tommyknockers, as the ship is dug up, the town begins to lose it. Different circumstances,but things quickly go from bad to worse in Under The Dome.
.
5. Message: King wanted to give a "message" in Tommyknockers. Kind of a Dwight Eisenhower warning about technology. But the message gets muddled. In Under the Dome, there is a clear message -- and it isn't missed. Why? Because King didn't just write the message into his book, he's preached it across America! "We all live under the dome."
.
6. Prose: The Tommyknockers was plagued by rambling prose, while Under the Dome is tight. In fact, several times I stopped the CD and mentioned to my wife how simple his sentences are in Under the Dome. "I wouldn't be comfortable writing things that simply, but it works."
.
Essentially, I think Under The Dome is a kind of redemption for Tommyknockers. It's not in any way a 1940's scifi, but it is a town in distress from an unknown force.
.
Mini-Series:.
I'm generally a fan of the Tommyknockers mini-series. I wish the spaceship were a little cooler. But over-all, I thought it was great. They managed to "fix" a lot of the problems in the book. My favorite scene: When the boy makes his brother disappear in a magic trick. . . and he can't bring him back! Ahh, that's good.
.
Under the Dome will also skip the movie scene and move to the small screen. This is a good format for King. Hopefully for those of you who didn't like the mini-series of the Tommyknockers, Under the Dome will be a "redemption" in that sense also.
.
Bookcovers:
.
Interestingly, The Tommyknockers is also one of those books that suffers from bad covers -- in my humble opinion. Anyone pick up the Tommyknockers and say, "Wow! A green glowing strip thing! I've got to read this book!" And, "Oh, it comes in gold lettering or in red. . . I've got to buy two!"
.
Under The Dome, by contrast, has a very engaging book-cover. One of the best.
.
Hey, if I can ask here. . . why do the British editions so often have better book-covers  WHY?! Why do the Bridish get to have bookshelves that look better than mine? Is this coveting? No. It's complaining, which is different.
.
Intentional?
.
A question arises: Did King in any way intentionally "redeem" elements of the Tommyknockers? I think not. He's never said so. But what is shows is growth in his craft. Something difficult -- a large cast, whole town, scifi -- first executed with a stumble is now offered up with a hard press toward the finish line.
.
King has said that it bothers him that people like The Stand best of all his books since it was written so long ago. Well, here is a fair contrast. Tommyknockers or Under the Dome? I think the growth of the artist is obvious. And in its unique way, Under the Dome redeems what the Tommyknockers lost.

Email ThisBlogThis!Share to TwitterShare to FacebookShare to Pinterest
Labels: Genre, Tommyknockers, Under The Dome