More On THE SHINING's Alternate Endings

Yesterday I posted a short bit of news about the alternate ending of Kubrick's The Shining.  I really appreciated a link Bev Vincent shared that gave some more information on the cut scene from The Shining, HERE.  (So yes, file this under. . . Bev Vincent still knows all things Stephen King!  I have no idea how he found this, but it's awesome.)


Any Kubrickphile given the opportunity will tell you there were in fact three versions of The Shining—the original release included a brief scene of Ullman visiting Danny and Wendy in hospital, where he assures Wendy that searchers have found no evidence of the supernatural events she had witnessed, and tries to convince her that her experiences were in her mind. It appeared between the final shot of Jack frozen in the maze and the long track shot closing in on the 4th of July photo.

This scene was cut from the film days after its first release (when it was only playing in a small number of theatres—this was typical of release patterns of the day, as opposed to today's "wide releases" that require thousands of prints); the cuts were made by hand from those prints, presumably by projectionists at the theatres, as well as from the internegatives that all subsequent prints were made from.


Consensus from those who saw the scene is that the film is better off without it. By taking viewers out of the conflict between the Overlook and the Torrence family the final menace of the hotel was weakened, and it unnecessarily pulled Ullman into that conflict (after ignoring him since the first act). The audience reaction was clearly not what Kubrick wanted, and so the scene was removed at the first opportunity. It has never been seen since, and presumably only survives in a vault in the Kubrick family's estate.


Two actors are still listed in the end credits, however: Burnell Tucker (the notably odd Clavius Base photographer in 2001) as a policeman, and Robin Pappas as a nurse.


None of the dialogue for the scene is available in any form. Three continuity polaroids from the sequence however appear in Alison Castle's The Stanley Kubrick Archives 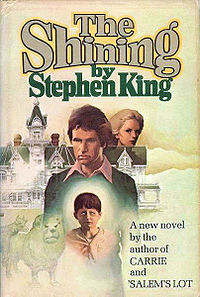 
"The Shining' was open right until the end. I didn't know what was going to happen until the very end. The shows in the book. The original plan was for them all to die up there and for Danny to become the controlling force o the hotel after he died. And the psychic force of the hotel would go up exponentially. . . But I got connected with the kid.

In the first draft of the book Jack beats his wife to death with the mallet and it was blood and brains and everything. It was really just terrible and I couldn't do it. I couldn't leave it that way." S.K. Goes To Hollywood, p.76

I am glad King didn't kill Danny!  After all, many of us are still hoping for Dr. Sleep, which is supposed to focus in on the character as a young man.  I blieve King has even toyed with the idea of having Danny meet up with Charlie from Firestarter.  That would be totally awesome!