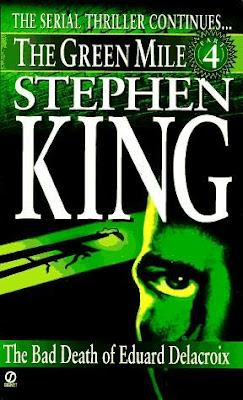 Just finished watching the Green Mile with my wife; both of us had wet eyes. I kept saying to her, "This is a good movie!" She got annoyed with that comment, but it really was a good movie.
.
For a long time I've felt like it might be best to skip King movies and just read the books. The movies never "add up." However, having collected all the first editions I can get my hands on for the budget I have, I decided this Summer to collect the movies. Of course, they have no value, but since I am pretty unfamiliar with them I thought I might give them a try.
.
The Green Mile is a favorite novel, so I came with low expectations for the movie. Kind of a sigh as I put the disk in: OKay, let's see what they screw up. But I think the movie was even better. Can that be? It can! The actors really made it happen.
.
King released the book in installments, like Dicken's did his books. I remember the excitement of waiting for each segment; then getting behind and thinking: Fine, I'll just wait for the novel to come out all at once. It is powerful in both forms (print and screen).
.
The movie does a good job of keeping the Hanks character in every scene. This is important because Hanks is telling the story (the book is also first person). Sometimes I get annoyed at movies where someone is telling a story, but I the viewer am given information or scenes they were not privy to.
.
Frank Darabont directed this film, along with other King titles The Mist and The Shawshank Redemption. The movie is pretty loaded with well known names, but the real magic is with Hanks and Michael Clarke Duncan. The scene of Coffey's execution is powerful. The Guards are in tears as they surround their friend at his death. They seem to stand in such a way as to block his seeing the viewers who hate him.
.
Connections to Christianity are unavoidable. As with the book, the links between John Coffey and Jesus Christ (J.C.) are noticeable.
.
Book covers: http://www.stephenkingshop.com/covers/TheGreenMile.htm
.
Movie Link: http://www.imdb.com/title/tt0120689/