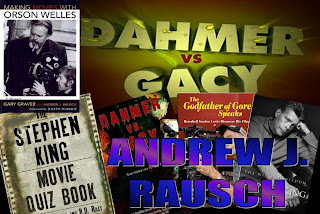 I am really excited to have the opportunity to interview the very prolific an energetic Andy Rausch.  Husband, Father, writer and producer. . . this guy is one busy fella.

Andrew J. Raush is the author of The Suicide Game, Riding Shotgun and was the screenwriter for the movie Dahmer vs Gacy.  He is also author of Turning Points In Film History, Making Movies With Orson Wells, The Films Of Martin Scorsese And Robert De Niro. 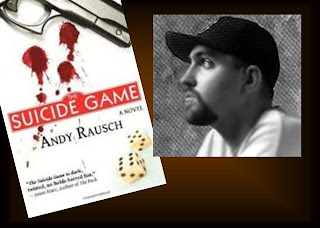 Talk Stephen King: Hey, thanks for agreeing to this interview. Tell me a bit about yourself.

Andy Rausch: I'm 39, married and have five children. I love writing, and I write every day, from screenplays to novels to non-fiction books to film criticism. I read a lot, and I watch a lot of movies. I don't know, I'm pretty boring. Not really much to say here.

TSK: You've done everything from producing to casting to acting. What is your favorite part of the filmmaking process?

Andy Rausch: Nothing beats the first time you see the final film. It's a rush, even when the film is bad.

TSK: What is the most challenging aspect of filmmaking?

Andy Rausch: Dealing with fifty different people, all of whom have their own ideas of how the scenes should be shot and how the dialogue should be spoken. There are many egos at war on a movie set. Lack of sleep is pretty challenging, too.

TSK: Do you have an all-time favorite movie?

TSK: You've written two books about Stephen King. Is he your favorite writer? What other writers do you read consistently?

Andy Rausch: Stephen King is in a three-way tie for my author along with Elmore Leonard and Kurt Vonnegut. I also read a lot of Max Allan Collins and Richard Stark.

TSK: Do you have a favorite work by Stephen King?

Andy Rausch: I love Pet Sematary. It was the first book that really scared the shit out of me. I was only eleven or twelve at the time, but it scared the bejeezus out of me. I've read it several times since, and have loved it just as much every single time. I'm also a big fan of The Shining. And Blaze. And Cujo... The list goes on and on.

TSK: What is your favorite Stephen King movie?

Andy Rausch: The Shawshank Redemption, hands down. I'm also a big fan of Kubrick's The Shining. I know that's blasphemy to King fans, but I really love that film. Stand By Me is pretty damned good, too. But if I'm being truthful, I have a soft spot in my heart for just about all of the King adaptations—even the crappy ones. Not the sequels, though. Most of those are garbage.

TSK: So long as we're dealing with Stephen King movies, I might as well ask: What King movie do you absolutely hate?

Andy Rausch: Hmm, tough one. How about the original Children of the Corn? And maybe all of its sequels. They're all pretty terrible.

TSK: The new Carrie trailer just came out. Did you see it? What do you think of this project?

Andy Rausch: I think it will be a good movie, but I think it's completely unneeded. The original is a very good film and the TV remake wasn't bad, either. Do we really need another Carrie film?

TSK: I see you've done some acting. If you could play any character from a Stephen King book on the big screen, who would you portray?

Andy Rausch: I'm no great actor, although I was relatively proud of my performance as a drug dealer in Evil Ever After, which virtually no one has seen... Usually I'm the guy in the horror film who gets one scene and then promptly gets killed. I got my heart ripped out and eaten in Zombiegeddon; I died a pretty gruesome death in Evil Ever After; I think I got killed by a scythe in The Ancient... So sure, if I had my choice I'd play someone like Jack Torrance in The Shining, but if I'm being realistic I would probably be that guy who shows up and dies immediately; the character whose name we don't even know!

TSK: Are there any King books that you think would adapt well to the big screen but just haven't made it yet?

Andy Rausch: Again, I'm really fond of Blaze. I know that one tends to get lost in the shuffle, but I think it's really great.

TSK: You seem to focus your writing energy on quiz books or compilations. This seems like it would be quite a different process from writing a novel. How long does it usually take you to put these projects together?

Andy Rausch: I've written almost 20 books. I'm currently working on my 18th and 19th books. Five of those are quiz books. I really hate to be pigeonholed as a quiz book writer, even though it's my fault for having written so many of them. Quiz books are kind of the ghetto genre of literature, maybe two steps below Harlequin romance novel. As for the compilations, those were interview collections, and I wrote those because I really enjoy meeting people whom I admire. For my book Fifty Filmmakers I got to meet all kinds of directors, from Budd Boetticher to Frank Darabont, and that was an amazing experience. I interviewed 79 directors for that and then whittled that down to the 50 that appear in the book.

I've also written some more serious books that I'm really proud of. I wrote a book called Turning Points in Film History that was used as a textbook in college film classes. Usually you have to be a professor to write something like that, so I really lucked out with that one. Another book I'm extremely proud of is The Films of Martin Scorsese and Robert De Niro. Both of those were difficult books to write and they required tons of research.

Every book is different. I once wrote an entire book in six weeks. But then the Fifty Filmmakers book took eight years to complete. I worked on my first novel for seven or eight years. It really just varies. It could be six months or it could be six years, depending on the book.

TSK: What made you decide to write quiz-style trivia books?

Andy Rausch: Well, my buddy and mentor Stephen J. Spignesi had published a couple of extremely successful Stephen King quiz books. I was still trying to break into publishing at the time and I thought, I could write something like that. I was still trying to find my footing and was unsure at that time about my abilities as a writer. But I thought, I know I can do this. So I wrote The 100 Greatest American Films: A Quiz Book, and it sold to the first publisher who looked at it. I really didn't want to write anymore quiz books, but the publisher offered me a contract for two more quiz books, Hollywood's All-Time Greatest Stars and The Greatest War Films of All Time. I was still new to all of this, and I thought, well, I may never get the opportunity to publish another book. A bird in the hand, you know? So I wrote those books. Then years later I got suckered into writing a fourth quiz book, Obsessed with Hollywood, and that book made me a ton of money. You would not believe how much money I made from that book, and it was funny, too, because I initially considered turning the project down. So that's how all of that happened.
The Stephen King Movie Quiz Book was mostly written way back around 2001, but I had never published it. It would have been my second book, but my publisher hadn't been interested in the idea. So I tucked it away. Then, years later, I came across the manuscript and thought, Why hadn't I pursued publishing this one? So I convinced a writer pal of mine, Ron Riley, to watch the last ten or so films and write quizzes for them. He did it, we found a publisher for the project, and the rest, as they say, is history.

TSK: Which of the books you've written is your favorite?

Andy Rausch: My novel, The Suicide Game, which was published last year by Taylor Street Publishing, is my favorite. It took me nearly a decade to write it, and it is a much more personal experience than writing non-fiction. My favorite non-fiction book is Making Movies with Orson Welles, which I wrote with Welles' cinematographer, Gary Graver. That was a great experience and I had the good fortune of becoming close friends with Gary and his wife, Jillian, before they passed away.

TSK: Which of the films you've worked on is your favorite?

Andy Rausch: Dahmer vs. Gacy, which I wrote. That one just turned up in Maxim magazine this past month. That was pretty cool. Working with producer Chris Watson and director Ford Austin was a great experience.

TSK: Since you participated in the Welles book, I'll ask you this... I've always been fascinated by the 1938 War of the Worlds fiasco. Do you think anything like that could ever happen again?

Andy Rausch: No. Today we have so much information—maybe too much information—at our disposal at any given moment. I think you could maybe fool a few people here and there, but convincing that number of people that aliens are attacking seems unlikely.

TSK: What projects do you have coming up?

Andy Rausch: I'm currently working on books about both Ed Wood and Tony Scott, who passed away a couple of months back. I'm also preparing to write a screenplay based on my book Making Movies with Orson Welles. It will be about Gary and Orson's friendship and the making of The Other Side of the Wind. 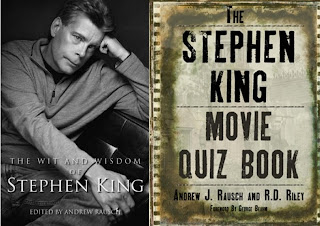