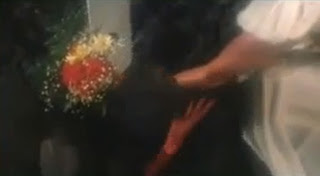 Remember how at the end of the 1976 De Palma version of Carrie, Carrie's hand reached from the grave?  It  was great!  And in a way, it was a deeply symbolic scene.  De Palma was making good  horror, not intending to symbolize anything.  But the truth is, Carrie still grabs us, doesn't she?

There are still Carrie stage plays, a major Broadway musical just wrapped up -- even after a major flop -- the book has been made into an audio book and in 2013 it will be a major motion picture. . . again.

Sissy Spacek did the unabridged audio edition in 2005 -- Twenty Nine years after she starred in the original  movie.  It's like Carrie just reached out and grabbed her.

Question: Why all these editions of a young writers first novel?
Answer: Because Carrie still grabs us.

The writer of Carrie has gone on to do many other things.  Has he outdone Carrie?  I think in strict terms of writing, he has.  King is a much stronger, engrossing writer now than he was when Carrie was written.  But the story itself has not been "outdone" by King.  It continues to engage us, draw us in and fascinate us.

Stephen King has gotten older, yet Carrie remains eternally young.  New editions come like waves, retelling this strange story of a kid with powers that could blow the entire town of Haven off  the map.

Here  are the raw elements that make Carrie so powerful:

1. We all identify in some way with Carrie.  We've all been tormented in some way, cruelly picked on in Junior High or High School.  It was "middle school" in the town where I grew up, and it was terrible!

Before Carrie reached from the grave, she reached from the trashcan!  Stephen King's wife saved the novel from the trash can.  She was moved by it, thought it was powerful, and convinced King to return to the book.  What's so powerful about it?  Why does it touch us so deeply?  Come on -- the thing starts in a locker room!  Who hasn't  endured that agony?  Worse, for girls, Carrie suffers her  first  period in a pubic and scary scene.  The sense of shame, embarrassment  about her own body and teasing are all things almost everyone can identify with (though women can identify more directly with the period thing).

2. We all identify in some way with Carrie's tormentors.  Many of us have found ourselves on the wrong side of picking on someone else. Belittling someone, joining in or piling on -- and in our hearts, we were disappointed in ourselves.

3. Crazy people really do exist.  Mrs. White might be nuts, but she is the kind of nut who is not so far out there that  we can't all say, "Yeah, I know someone a little like that!"  She has a twisted theology that allows her to hate (in her case, hate men).  She believes that being hard on herself, and Carrie, will result in God's approval, resulting in self-righteousness.

Religious nuts have the ability to miss the full sweep of the Gospel and pick up on bits of minutia -- twisting them into their own strange doctrine.  They particularly love prophecy, since no one can "prove" them wrong (in their own minds, at least).  Did anyone see the postings recently for the new  Carrie movie on facebook?  They showed  notes from Carrie with quotes from Revelation.  No doubt this is the work of Mrs. White.  Revelation is the favorite book of the religious weirdo.  There aren't just a few of these people!  There are so many, most of us have encountered more than one.

4. Carrie nukes her oppressors.  It's wonderful!  She gets even with those who hurt her.  We look forward to seeing everyone get what they deserve.  Or, put another  way, Carrie pays off.  Some books don't.  They tease  and play and then leave you empty.  (Try the Needful Things movie for an example of hollow endings).  But with Carrie, the bad guys get sunk!  In fact, she does what everyone wants to do from time to time -- she drops burning heaps of revenge down on her  tormentors.

Another  "Bully" book that gets remade a lot is Steinbeck's "Of Mice And Men."  The book also has a surprise ending that leaves us talking and rethinking things.  I wouldn't change the ending even if I had the power to . . . but I would like a choose your own adventure on that story.  How about Carrie White lend Lennie Small her powers for a moment and let him do in the big bad farm hands, who are nothing more than taunting teenage girls.

5. It doesn't take King long to get his work done.  Carrie is a short novel.  Any adaptation follows the  same pattern of torment and  then revenge.  But a nice thing about Carrie -- the revenge sequences are not a quick tack on at the end.  In Carrie, we get to relish her powerful revenge.  There are a lot of "oh yeah" moments as Carrie brings down the house.

6. Surprise -- We keep going back, partly, because we want to see HOW exactly she'll carry out her revenge in each edition.  I like De Palma's version best, where mama gets a strange form of crucifixion.  More than that, De Palma lets Carrie reach from the grave. . . very nice!

I asked my wife, "Why does Carrie continue to have such life?  Why does the story about a tormented school girl get so many editions?"  She said it is a timeless story, yet as years go by it lends itself to  new perspectives.  So the story remains essentially, but allows  room for creativity.  This is exactly why I am looking forward to the new Carrie movie.

For a novel written in 1974, Carrie continues to  have an amazing grip on us.