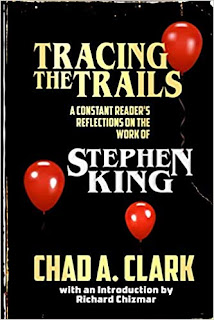 I'm swept away.  If my favorite writer is Stephen King, my favorite kind of books are books about Stephen King.  There have been times that I've wondered if I actually enjoy reading books about King as much as I love reading King himself.  Nah.  Well, maybe. . .

I'm currently reading Tracing the Trails: A Constant Reader's Reflections on the Work of Stephen King, by Chad Clark.  And yeah, I'm pretty much in love already.  I was familiar with the project --  a plan to read all of King's work in order -- from the blog.  What I didn't know until the other night is that the blog had been transformed into a wonderful book.  And it's a gem.

What I love about some so many of the books about King is that they reflect and articulate my own journey with the author.  Moments I felt were solely mine turn out to be shared experiences.  We all shared 9/11.  But we also, we all knew we were sharing the moment.  In the introduction, Richard Chizmar shares how he first encountered King, at almost the same age I did.  And I too remember the day IT was released (I was a kid) and how the book was like stacked bricks in the bookstore.

Clark's book gets to the point quickly.  Discussing the novels first, he opens with reviews of Carrie, Salem's Lot and The Shining.  Clark does take time to give some insights on the movie version of The Shining, only because it has become so controversial.  Like him, I enjoy the movie very much, and can simply shrug and say it stands as its own thing; its own art.

It is when he came to The Stand that I felt the deepest connection to Clark.  Like Clark, I was introduced to the Stand in it's unabridged format.  For years it was not available in audio (my preferred avenue) so I developed other means of listening to the book.  In the 90s I became a member of an audio book store that had tapes of the original version of The Stand.  Later (when I had more money) I bought the tapes off the internet, sent them to a company, who recorded them digitally for me.  But imagine how happy I was when The Stand unabridged finally came out on Audio and CD.

Clark's essay's so far are spot on.  You don't have to agree with him on every point to enjoy the road trip with him.  The book is like a long drive (or for me, listening while running, a long run) with a good friend who is familiar with every Stephen King book.  Clark doesn't try to be a scholar, he just shares simply what he likes or doesn't like about the book -- like your friend would.
No comments: Links to this post

Email ThisBlogThis!Share to TwitterShare to FacebookShare to Pinterest
Labels: IT, It Chapter 2, IT Movie