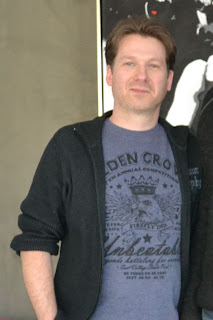 My favorite Stephen King website is Lilja’s Library. (www.liljas-library.com) There is actually more content on this site than King’s official web presence! Full of interviews, news, podcasts and links, Hans Ake Lilja has created one awesome Stephen King hang out. He is also a very gracious person, always quick to answer questions and upbeat about King projects.

Talk Stephen King: Hi Lilja! Thank you so much for agreeing to another interview. I really liked your book, Lilja’s Library.

Lilja: Thanks! It’s always a pleasure talking to you!

TSK: I see you have a new book coming out, The Illustrated Stephen King Movie Trivia Book. Can you tell me a little about it? What makes it different from other trivia books?

LILJA: Well it’s actually The Illustrated Stephen King Movie Trivia Book and it focuses on the adaptations on King’s stories and it covers movies, TV series and Dollar Babies. The questions span from quite easy to really hard so anyone, die-hard fan or just an avid reader, can enjoy it. It’s up to date and it has illustrations by Glenn Chadbourne and an introduction by Mick Garris. I’m very proud of it and I think readers will enjoy it.

TSK: The book was written by several outstanding authors. How did you collaborate?

LILJA: Well, it’s written by me, Kevin Quigley and Brian Freeman. We all came up with questions for the book and sent stuff back and forward to each other by email. It’s amazing how the world has shrunken. I’m in Sweden and Kev and Brian in the US but it still worked without any problems. When the questions where done Glenn did the illustrations and Mick wrote the introduction and it was all then put together into a great looking book by Cemetery Dance.

TSK: One of my favorite features of both your book and website is the interviews. Any upcoming interviews we can look forward to?

LILJA: Well, I always try to get a chat with interesting people and I hope to keep doing that for as long as I run the site. Who might depend on what happens next in the King world… 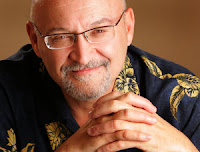 TSK: Do you have a favorite interview (other than King himself?)

TSK: Under the Dome seems to be breaking ground and making headway where other King television projects have failed; what do you think of the series?

LILJA: Well…it’s OK but it has problems. Let me explain. First, the show looks amazing (except from that cow that was cut in half which was a big disappointment). And I don’t have that big problem with the fact that they have changed the plot quite a lot like many others seems to have (and that King himself defended) but I do have some problems with the characters. I don’t like the Joe and Norrie characters. They feel very strange to me. I also have problems with Carolyn who feels too much out of place. The dialog sometimes feels more like it’s from a daytime drama than from a Stephen King series. However, my biggest problem is that I don’t get that feeling after an episode that I need to see the next episode ASAP. I get that with shows like Dexter and The Walking Dead but not with Under the Dome and that is a problem.

TSK: Were you glad Under The Dome was renewed for another season, or were you hopeful it would be wrapped up this year?

LILJA: I was hoping for it to wrap up this year. I think it risk losing viewers during a second season and maybe get canceled before they have the time to give us the ending they want and we’ll be hanging. I hate when that happens! I think that if it had aired at any other time then during the summer when the competitions from other shows are less fierce it would have been a one season series…

LILJA: No, not really, could be anything. I’m glad though that they have decided to do a different ending then the one in the book. I don’t like that one.

TSK: Are you still tracking with Haven?

LILJA: Yes, I am. It doesn’t have much to do with King’s book any more but it’s a nice show and I can’t wait to see how they will solve the ending of season 3. It better be good though… :-) 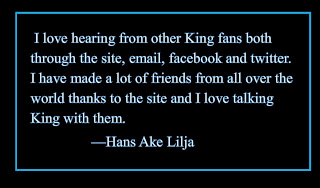 TSK: Do you have a favorite thing about operating a Stephen King website?

LILJA: Talking to all the other fans! I love hearing from other King fans both through the site, email, facebook and twitter. I have made a lot of friends from all over the world thanks to the site and I love talking King with them.

TSK: I’ve been watching for news about several proposed movies – any news about remakes of IT or The Stand?

LILJA: No, it’s been very quiet about those. I haven’t heard anything in a long time so maybe they have been canceled of stuck in the famous development Hell…

TSK: Having seen Under The Dome, I can envision a television show based on The Stand. What do you think?

LILJA: Yeah, I guess it could be done. We could have people trying to survive the plague for many seasons but I prefer to have King’s books adapted without an open ending like an ongoing TV series. There are so many original ideas being turned into TV series that are good anyway so I say “Keep close to the original when it comes to King”.

TSK: I don’t see a review of The Shining. Do you think you might post one with Doctor Sleep coming out soon?

LILJA: Don’t plan on doing that. I will review Doctor Sleep through and I bet I’ll be referencing back to The Shining in that review.

TSK: Doctor Sleep sounds absolutely incredible to me. It’s not really like King to return to previous works. Do you think this might be a trend of things to come? Could he give us a little more of Charlie from Fire Starter?

LILJA: No, I think this is a one thing deal. Given the history of King’s book it’s like you say not often that he goes back to older books and write about those characters again, other than if he lets them do a guest appearance in a new book. But you never know, maybe this has gotten him interested in following up on older characters. I would personally prefer a third Talisman book.

TSK: What do you do outside of the world of Stephen King?

LILJA: Well, I run the site The Walking Dead News (http://www.TheWalkingDeadNews.net) that’s dedicated to all things about The Walking Dead
and I speak my mind on the facebook page “Lilja Speaks” (https://www.facebook.com/LiljaSays).
Then, together with a friend, I run a Swedish Stephen King site called Följeslagarna (http://www.Foljeslagarna.com)
and a DVD review site called DVDKritik (http://www.DVDKritik.se).
So, I keep busy. :-)

TSK: Thank you so much!
LILJA: You're welcome.