Why Is IT So Mean? 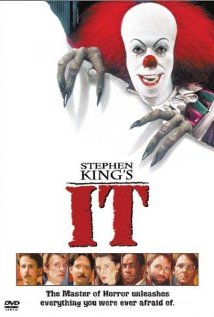 I've been on vacation with my family.  My mother loved the Stephen King novel IT. She mentioned several times that she wanted to see the mini-series, even though I discouraged her.  However, I finally gave in (okay, she didn't have to push too hard) and spent the $7.  I might have paid too much.

I haven't seen the entire mini-series in years. I was startled to discover just how good it is!  "This thing still bites," I said. The first half is excellent.  I find the scenes with the children over the top scary.  When the clown in interacting with children, their fear is very real.  But then something really bad happens -- and it's not Pennywise -- it's part 2.  All of it.

Part 2 should have been the stronger part, since it not only contains Pennywise's defeat, but well known actors take the stage.  These are people who, by 1990, had plenty of time to hone their craft.  But they were terrible!  The show sinks into melodrama.  Scenes that should scare, get a laugh.  When Pennywise makes bad  things come out of the fortune cookies, it's just flat out funny.  In fact, not once does the second half of IT produce a scare of any kind.

There is something sincere in the children's portrayals, and something quite plastic about the adults. Interesting how young people who did not have the time to learn to pretend brought the real deal to the small screen.

The second half fails to produce any real drama, romance or tension.  The viewer is not left wondering if Pennywise  will live or die.  In fact, by the time we get to the final battle with the monster, we've lost so much interest in these characters that it would be just A-Okay if the monster did take them down.


Least favorite scenes:
(Please keep in mind that this does not mean I disliked the same scene's in the book.  In fact, often these were scenes I thought rocked in the novel and was saddened they were not brought to life with any zeal.)

The 50's
The show authenticates a small town circa 1950's so well, it makes the stuff with the children more believable.  You get the feeling this really happened back then.

I was a Knotts Berry Farm with my family this week when a quartet came into the Johnny Rockets there  and asked if they could sing for us.  Sure!  Their song?  "It's alright."  Same song used in the movie during the dinner scene.  (The group was The MoonRays)

Final thought: There isn't much they can do on screen that beats what Stephen King can do with a  typewriter.