Under The Dome: America Is Smarter Than You Think 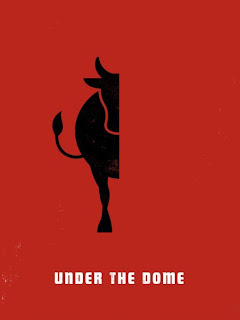 CBS is committing a pretty big offense in my opinion; they're acting like America is stupid.  Well, we are sometimes, but we don't want to be talked down to or spoon fed plots that wouldn't even work on daytime TV.

I've liked Under the Dome a lot. But last weeks episode was terrible.  The mystery they are trying to create is getting lost by the whacky way they choose to leave clues and introduce characters.

First some small stuff.  It seems someone can't keep good time between scenes.  For instance, we'll get people driving across town, cut away to a long scene that should take hours, then cut back to the people driving and they are just arriving.  Didn't they get there already?  When Julia and Joe go to the mini-dome, they communicate with the dome then head back.  There is a scene break, and when we get back  to Julia  and Joe  they are coming back into town -- but it's night.  It was day when they left the mini-dome.  How long does it take to move across this town?

The writers worked overtime to make it clear that Carolyn would not be in this episode.  They talk about her, but only to explain to us -- the poor dumb audience -- that her presence is unnecessary. They even skipped the burial scene so as not to have to bring her into the episode.

Then we have Ollie.  He manages to surround all of his enemies -- the Sheriff, Big Jim, Junior and Barbie.  So what does he do?  He gives them a big warning and sends them on their way.  Because, of course, it's a good idea to save  the battle for another day when it won't be so easy.  If Ollie is power hungry, why does leave all of his opposition in power when he has opportunity to take them down?  It's no surprise that Big Jim goes right back and gathers his forces.  And, to make it worse, he then trusts the son to kill the father.  No chance of the boy backing out on that, right?

Scenes between Big Jim and Ollie are reduced to melodrama. It amounts to Ollie saying, "You want the power,  but I want the power.  And I'm going to get the power from you." And Big Jim saying something like, "This is my town. I'm going to do whatever I can to keep the power."  (That's not what they actually said.)  After watching scenes like this, where characters are reduced to stating the obvious for the sake of the poor audience who might not be able to keep up, I find myself mentally checking out.

The best place Coggins could think of to hide his stuff is in a coffin?

Why have  people stopped congregating outside the Dome?  Where is the press?  Did the military chase everyone off?  It seems the citizens have very little interest in making or maintaining contact with the outside world.

With Ollie removed, it seems the writers realize they need someone to create tension with Big Jim.  So, out of the blue, we're introduced to Max.  Understand, this isn't near the beginning of the series, but well into the character development already in play. She knows these characters, has history in the town and seems to have the goods on everyone.

But wait CBS. . . where did Max come from?  Is she like Maggie Simpson, able to slip under the Dome and back? Not at all!  There's a much more reasonable explanation.  See, she's been trapped in the dome all this time, but just decided to spy on everyone. Unbelievable in itself, the situation is more sticky when she explains that she managed to keep from making contact with anyone when the Dome came down.  So all of her news has come by independent observation and by listening to the radio station.  Yet she seems quite in-the-know as to what's happening.  This entire line of plotting is the kind of thing that frustrates me.

Also, we are supposed to think that Max resisted to urge to get with other people, reconnect with society, and instead has simply been plotting how she might benefit from this crisis.

She's been hiding all this time -- apparently in a salon, because she looks like she just stepped out of the Barbie dream house.  She slipped into Big Jim's house (of course a paranoid like him wouldn't lock his door) in high heels?

This is where television writers lose credibility.  "We can do anything," the reasoning seems to go, "because you're dumb enough to follow."  Just because we like a show doesn't mean we're ready to swallow anything they throw our way. We start watching a program because it seems to hold some level of credibility.  To be enjoyable, a big idea has to be carried out with some realism; all the more when the central idea is science fiction.  When viewer start to get the impression that the writers aren't going to play by fair rules, then interest wanes.

I am getting concerned that the writers don't know what the Dome really is.  They are piling on so many clues they can go any direction they want.  But will it all add up in the  end?  I hope so.

Email ThisBlogThis!Share to TwitterShare to FacebookShare to Pinterest
Labels: Under The Dome Series, whining