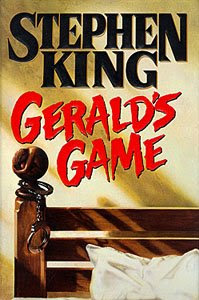 After Stephen King blew up Castle Rock, he decided to move on to completely new ground. The next two novels would focus on women, then old people, then back to women. It was an interesting period. Thank goodness for the Green Mile -- which seemed to break the rut for King. In most of King's previous works, King had not coused heavily on sane women. There was Annie in Misery and Bobbie in the Tommy Knockers, but Annie was crazy and Bobbie possessed. (Though Polly, who lived in pain, was a great character in Needful Things) Anyway, the two "woman" novels set side by side with matching looks and crossing narration.

Jessie Burlingame changes her mind midway into a kinky game of bondage with her husband. He has her handcuffed to the bed when she begins to protest that she doesn't want to play after-all. However, Gerald doesn't stop! So Jessie kicks him, hard -- and he falls backward to his death. The book's action focuses mostly on the tension Jessie experiences as a dog and later a serial killer enter the cabin.

Much of the book focuses on Jessie's past, and the big eclipse. King explores sexual abuse. It is the kind of focused, tight writing that King enjoys. Not a cast of characters, just one woman alone, tied to a bed.

This is not one of my favorite novels. It's a little slow, and thankfully it's not real long. This is one of those where you're left going: "A little more story, and a little less character development -- please!"

Why Read Geralds Game?
Two words: Doloros Claiborne. Doloros says that during an eclipse she became very concerned about another little girl. We realize that other little girl is Jessie -- and she was not okay! I remember ice running over my spine as I read that. Wow, Stephen, that's good stuff!