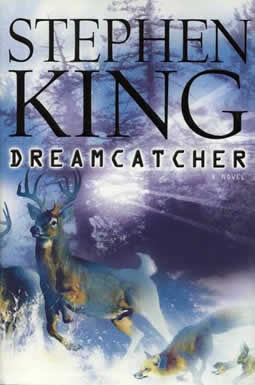 Dreamcatcher was written after Stephen King's accident in which he was bedrdden for an extended period of time. He wrote the book by hand! That's impressive. He's said that writing by hand got him closer to the language, the words, than he'd been in a long time.
.
Dreamcatcher starts out very strong. The characters are great! But the middle begins to sag but it picks ups stream again the book races toward the end. Maybe a better way to say it is that for such a good beginning, the rest of the novel is uneven. It certainly -- certainly! -- has great moments (SSDA). The beginning is strong enough to carry the rest of the book and forgive the faults found as the novel moves on. And the end is strong enough to cause one to forget what didn't work. Bluntly: I liked it and would consider it one of my top 10 favorites.
.
My wife and I first tried reading Dreamcatcher on audio. we were listening to it in the car, but got so hooked that we pulled out a tape recorder (yes, tapes!) and listened in the house. But we lost interest as the story moved to a military battle. The idea of four guys in a cabin was interesting, but as the novel opened up, it was hard to connect with the new characters. Most recently I read it again on audio, from the local library. Funny thing, they don't give you as many audio renewals as they would for a book. . . but I never read an audio book as quickly. I had to keep returning to the library begging for mercy "please let me finish this, I only have four more hours to go. . ."
.
The novel reminds me of IT and Stand by Me. King addresses this in the special features of the movie. Not only is it a Derry novel, like IT, but it is the story of children who suffer something tramatic and must then face their childhood monsters as adults. Also, the way the children stand up for Duddits reminds me of the children in IT standing up for Ben.
.
I've seen reviews that compare Dreamcatcher to Tommyknockers -- it is not! The book "moves" better than Tommyknockers, is paced nicely and the characters are simply better. Dreamcatcher is a much more focused novel. The only real similarity is that both are Science Fiction. Bret M. Funk wrote, "And as a whole, the story lacked King's usual power, leaving me satisfied, but not necessarily wanting more." http://www.sffworld.com/book/1275.html I think the book is much stronger than that.
.
On King's website, one fan wrote: "Extraterrestrial invasion feels so cliche by now" But that's what's exciting when King takes on an issue. He uses cliche's we know well, but brings them home. In fact in this case the cliche is right in our bathroom! it's not V or Earth v. Flying Saucers. . . it feels like it could be any of us. Same thing that happened with Salem's Lot. Imagine someone saying, "Vampires are so cliche." Yes, they are! But King brought them to modern America. Same with Zombies, clowns, flu strains and good old fashioned ghost! King's ability is to bring the cliche into our world. We don't have to imagine castles in Europe in Salem's Lot's case, it's right here! That's why I think the books strongest points are when it's dealing with the guys in the cabin (and subsequent chase as they head to Duds).
.
One note on the movie: Jason Lee's portrayal of the Beaver was nothing like what I had imagined in the book! I pictured a big bumbeling guy, and in Lee we got something of a nerdy character.
.
Bookcovers: http://www.stephenkingshop.com/covers/Dreamcatcher.htm
.
Movie link: http://www.imdb.com/title/tt0285531/