The Stand Will Be An 8 Part Mini-Series 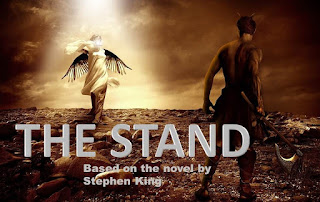 Jeff Sneider at thewrap.com posted news that The Stand "will take a revolutionary detour to the small screen."  Wait, whats happening?  Warner brothers and CBS are in talks with Showtime to turn the novel into an eight-part miniseries.  But that's not all; it comes to a big massive end with a big screen "big-budget" feature film.

Of course, the miniseries format allows for a bigger story; one more true to the novel.  By going with showtime instead of network TV, the story is more leeway to be a true horror pic than the previous miniseries offering.

Here's the facts as reported by thewrap.com:
Josh Boone will write and direct the miniseries.
The miniseries should start shooting early next year "as one cohesive production."
"Boone is expected to set his sights on several A-listers."
WB will handle the theatrical distribution of the movie.  (Which explains why showtime is involved.)

What was great about the 94 version of The Stand: Gary Sinise, and Rob Lowe.
What was not so great: It was very 90's.  Molly Ringwald.  Television.
12 comments: Links to this post

Finders Keepers is the sequel – kind of – to Stephen King’s Mr. Mercedes.  But, in typical King fashion, the novel doesn’t quite feel like a sequel.  Because the story doesn’t pick up where Mercedes left off, it backs up and moves through scenes we’ve already been to in the first novel, but this time with different characters.  Thus we the reader relive the horror once again, but from a new angle.

Finders Keepers is certainly it’s own book; but it is wound tight with Mr. Mercedes references and story twists.

I’ve been away from reading Stephen King for a while, and the arrival of Finders Keepers caught me by surprise.  “Oh, is that this week?”  And then a little fear.  I couldn’t even remember everything Mr. Mercedes was about; details had slipped away.  Was I ready to return?  What if the magic had left?  But the warmth hasn’t gone anywhere.  Those “OH YES!” moments of reading a Stephen King novel come quick in Finders Keepers.  That’s partly because it is a second novel, so King is giving us easter eggs right from the get go.

You know about Stephen King “Oh yes!” moments, right?
That’s when Carrie burns up her school, and your heart goes, YES!
When a writer pulls off something, maybe something you didn't see coming, and you're amazed at how they did it.  When Roland steps into the world of The Stand.  Or, when the corpse comes to life in Revival.  Or when the grieving father carries his dead child up to the pet cemetery, and you know this novel has some traction.  Inside, you're going, "Oh yeah!"

I love it when two books come together and you feel distant sparks.  Like when Gerald’s Game and Dolores Claiborne touch.  Of course, Mercedes and Finders are supposed touch.  But the way King does it is mesmerizing.  He doesn’t just bop on with the story, picking up where Mercedes left off.  He starts a new story, running alongside and intersecting the time line of the first novel before eventually starting on a fresh track.  This is brilliant!  And powerful when done by a master like King.

As with any King book, the characters take center stage in the story telling.  What I like is how very complex King makes characters.  These people feel real.  Someone injured by the evil Mr. Mercedes isn’t just a poor pitiful victim in a Stephen King novel; they are a real person.  King shows us the emotional pain a physical injury can bring to a marriage.  I like it that King allows characters, children, to make up expressions for their parents behavior.  Adults don’t just argue, it’s the arkie barkies.

By the way, any time someone digs up a buried treasure chest in a Stephen King book, your heart should start pounding.  Because -- I mean, it's Stephen King!  Who knows what's in that chest.  Could be pirates gold or money.  But it could be rotted body parts or a clown nose.

A quick note here about the style of the book.  First, unlike Mercedes, I have not detected that the novel is told is strict present tense.

Second, there are points where the narration allows dialogue to flow like a play.  You know:
Dad:
Mom:
Dad:
(A side from the one observing.)
This is interesting because I haven’t ever seen King use this approach in a novel.  Certainly he’s written plenty of scripts, but novels usually have the normal back and forth flow of quotes mingled with narration.  In fact, I was unaware that it was “okay” for a novel to use this style until I read The Keep, by Jennifer Egan.  I was so startled by how easy she made the dialogue using this format that I incorporated into my own writing.

Just under the surface of Finders Keepers is the ever evolving discussion about The Writer.  King gave us a first glimpse into the writer in Misery.  In Finders Keepers, a writers notebooks become part of the driving force of the novel.

Of course, King has insisted he doesn’t use an idea notebook.  In fact, he’s said that a writers notebook is a great way to preserve bad ideas.  The good ones, King says, stick with you.  (This is like preachers who insist they don’t use notes. The truth is, they don’t always stay on topic and tend to talk too long.)

That aside, there are certainly piles of Stephen King notebooks we would all love to see.  Much if not all of Dream catcher was written by hand and filled a pile of notebooks.  Wouldn’t you like to have that in your collection?  Finders Keepers is partly about a guy who steals a writers notebooks.

I enjoyed the review of Finders Keepers at avclub.com.


And now I'm off to read the book.
2 comments: Links to this post