Interview With Kevin Quigley: What's Up With Frank Muller's Reading Of THE MIST 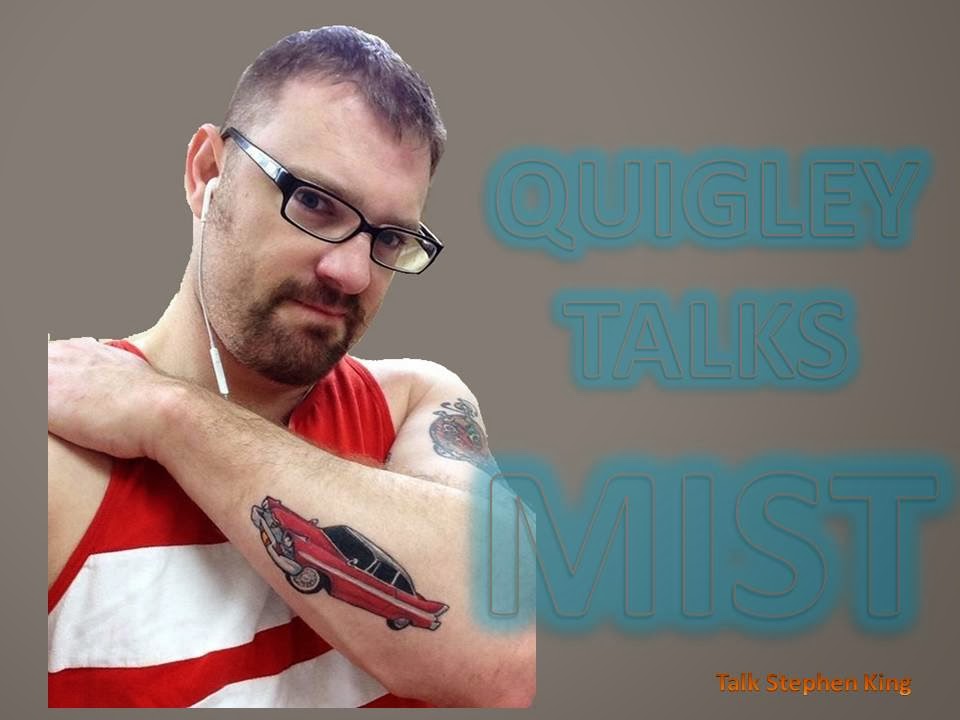 I am a fan of The Mist.  I think it's a great story.  It's also been adapted many,  many times.  By far, one of the things I've gotten the most  questions about over  the years of blogging is about the Frank Muller reading of the Mist.  Where is it?  Curious myself, I went to the best source I know of, Kevin Quigley.  Quigley is the keeper of the King website Charnel House and a contributor to fearnet.

Okay, let's talk about the Mist and all things Stephen King!

Talk Stephen King: Hey, I’m really excited to talk about the Mist with you. I loved your book, Blood In Your Ears, in which you discuss the audio version of The Mist. What do you think of the story itself?

Kevin Quigley: “The Mist” is one of my favorite King stories.  Quite a lot of King’s novella work stands as his strongest material – see also “Secret Window, Secret Garden,” “Apt Pupil,” “The Body,” “A Good Marriage,” “The Langoliers.”  It’s got the punchiness of a short story but you get character development and multiple show sequences like in a novel.  I also really loved the open ending.  King returned to that stylistic concept later in his career – with From a Buick 8, Cell, and The Colorado Kid – which pissed a lot of people off, for some reason.  I love ambiguity.

TSK: I loved the movie. It seemed to successfully capture the tone of the novella. What did you think of the film?

KQ: Most of the movie is terrific.  You’re right about the tone – it perfectly captures the 50s monster-movie feel, while also delivering on contemporary characters and scares.

TSK: The novella left the story open ended. The movie, however, chose an ending scene that was rather controversial. King said he liked it. I hate it. Which of us is right?

KQ: King and I often disagree about movies.  The ending of The Mist is atrocious.  It’s going for shock value and succeeding at that, but it doesn’t do much for the film itself.  It’s a complete shift in tone and intent, one that feels incongruous with the rest of the movie. 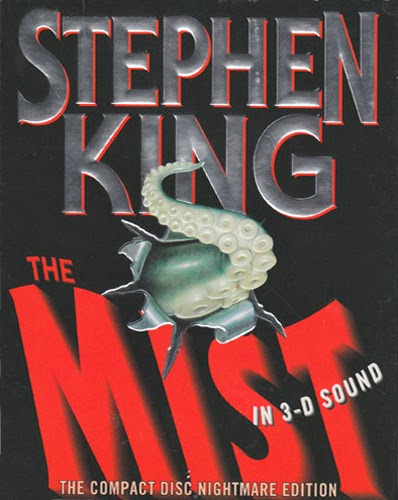 TSK: The audio 3D version of the Mist was awesome. It seems to have been commercially successful. Do you think that format will be utilized for King stories again?

KQ: Well, there have been other King dramatizations.  There’s one for Misery and Pet Sematary, one for ’Salem’s Lot.  Most are unsuccessful, I think in part because they’re unable to reimagine the work from the ground up.  King’s cinematic sequences in his novels work because he’s terrific at describing scenes with punch, but much of that works on the page, where exposition and imagination holds sway.  It’s the reason why so much of King’s filmed adaptations work less often than they should.

I also think, though, that a number of King’s more plot- and situation-driven work could benefit. I’d love to hear an adaptation of “The Langoliers,” for instance.  I think “The Breathing Method” would work very well, and maybe “Big Driver” and “The House on Maple Street.”  For novels, I think they could really kill The Regulators.

TSK: One of the things people ask me about is the Recorded Books 3 tape set read by Frank Muller. In your book, Blood In Your Ears, you pointed out that this was out of print. What exactly does that mean? That seems crazy in the King world! Nothing goes out of print. Is there a copyright problem or something that you know of?

KQ: King’s novels don’t go out of print, but versions sometimes do.  For example, when was the last time you saw a copy of The Dead Zone with the movie cover?  Same with audio books.  Sometimes they make a new version that they deem is “better,” and the old one goes away.

Skeleton Crew is a frustrating instance, because a perfectly terrific version of Skeleton Crew on audio simply doesn’t exist anymore.  The collection Skeleton Crew: Selections is the only version available on audio, which is insane.  Sure, the narrators are fine – King reads “The Raft,” and it’s awesome – but there are only four stories.  Why let the terrific Frank Muller version rot in purgatory?

TSK: One fan emailed to tell me that Recorded Books told them that they no longer held the copyright, that it had gone to Muller’s estate. Any way to verify that? Do readers actually own the work?

KQ: As far as I can tell, readers do not own the work at all.  From what I understand, the author of the work retains all copyrights to the book.  An audiobook is one way of “copying” the book, so a person can’t replicate the work without permission from the author.  It’s not that different from a publisher doing a limited edition work; the limited edition doesn’t become that publisher’s book just because they manufactured it.

TSK: Do you think that with everything going digital that there is a chance a publisher like Audible might pick it up?

KQ: Well, Audible doesn’t generally publish professional books themselves – they’re more a distributor for established publishers’ audio arms, or publishers like Recorded Books – but they do have a healthy business in amateur recording.  But I get your point, and I hope they’ll do right by Skeleton Crew.  In 2010, there was an audio onslaught of King books that had only previously been available as Library of Congress recordings.  Penguin brought out new, professional recordings of Christine, Firestarter, Cujo, Danse Macabre, The Eyes of the Dragon, It, and all the early Bachman novels except Rage: The Long Walk, Roadwork, and The Running Man.  Soon after, Random House released the mammoth recording of The Stand – over 47 hours! – read by Grover Gardner.

At current, the only full Stephen King books you can’t get on audio are Pet Sematary and Skeleton Crew.  I am assuming that Sematary is tied up in rights issues, but I don’t know about Skeleton Crew.  And unfortunately, while there are terrific unabridged versions of The Regulators read by Frank Muller and Desperation read by King himself, those were only available to libraries.  The commercial versions – not-bad recordings by Kate Nelligan and Kathy Bates – are fine, but horribly abridged.

TSK: Have you heard the Muller reading? What did you think?

KQ: I have, and it’s terrific!  As assured and sonorous as his later recordings.

TSK: Any new projects we can be expecting?

KQ: Well, we can reasonably expect new audiobooks of Mr. Mercedes and Revival coming this year, but King has also been pretty liberal with audiobooks of his short stories lately, so we might see more of those popping up.  I’d love to see the unabridged recordings of Desperation and The Regulators, and of course Pet Sematary make it to Audible soon.  I’ve been on a King audio kick lately – The Dark Half, Misery, and Christine in rapid succession – and I want more.

TSK: Okay, some quick fire questions while I have you here. Answer like it’s gunfire. . .

TSK: What did you think of:. . .
–Carrie remake?  Not bad, but too close to the original.
–Doctor Sleep?  Pretty good, but I was far more involved in the characters than the plot, and wanted more of Danny and Abra than the True Knot.
–Joyland? One of King’s best books of the last decade.
–Under The Dome television?  I watched the first half of the season, then lost the thread. That might have more to my schedule than the show, though. 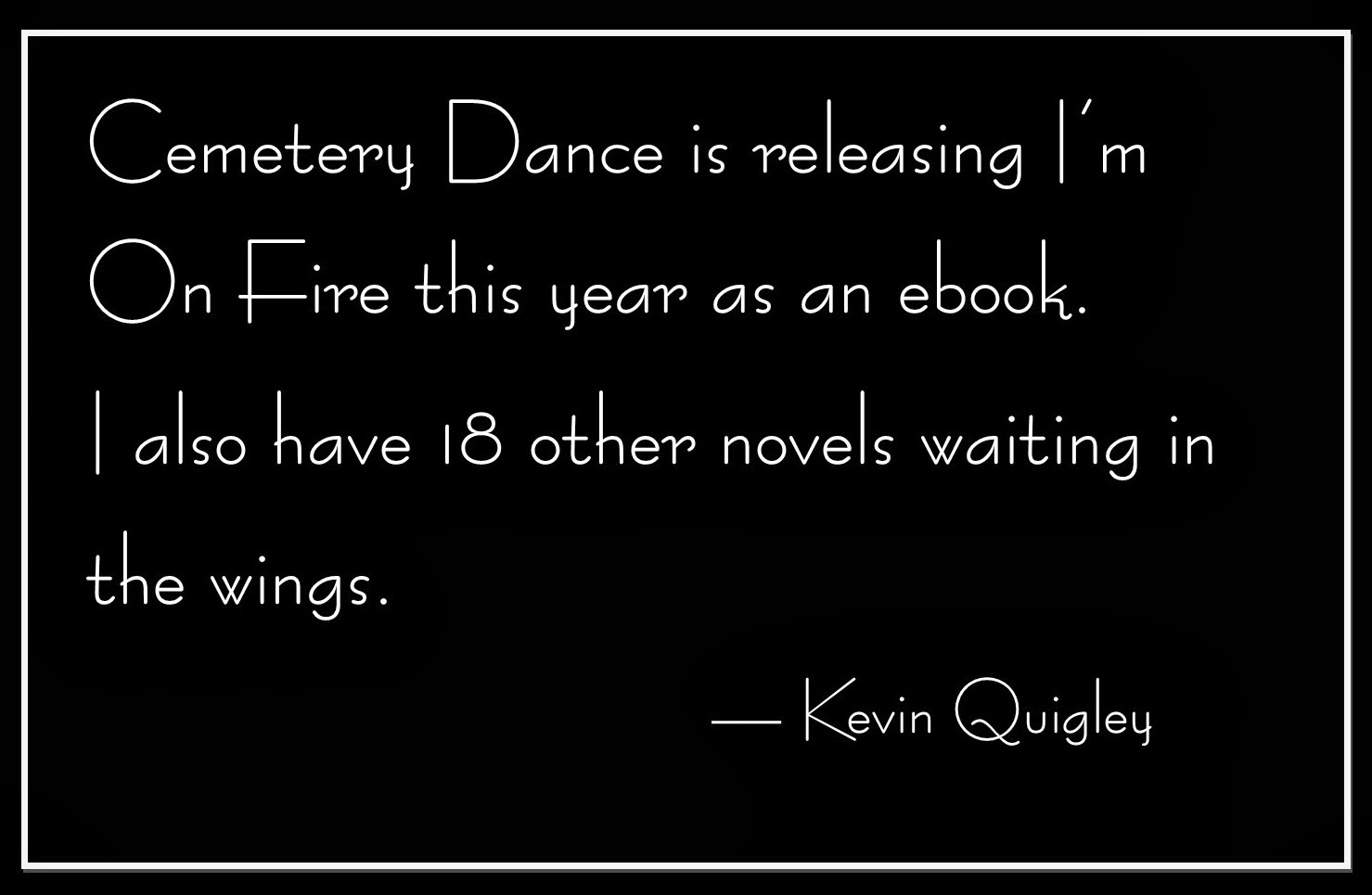 TSK: Which is better,
--Joyland or Doctor Sleep? Joyland!
–Carrie or Carrie 2013?  Original!
–Doctor Sleep or The Shining? The Shining!
–Wetware or Blood In Your Ears?  My babies!  I took a little longer with Blood in Your Ears and I like the finished product a little better.
–Ink in the Veins or Chart Of Darkness? Chart of Darkness. I love Ink in the Veins, but Chart of Darkness was a passion project, AND my first book for Cemetery Dance.
–Haven or Under The Dome?  Under the Dome!

TSK: Do you have a novel?
KQ: Yes! Cemetery Dance is releasing I’m On Fire this year as an ebook.  But I also have 18 other novels waiting in the wings.  Most aren’t horror, which is why I’ve had some issue with placing them, but you might be seeing more of them sooner rather than later.  The book I’m working on now is a coming of age story called Roller Disco Saturday Night!

TSK: Thanks Kevin.
KQ: Thanks!
--
Kevin Quigley is author of I'm On Fire, Stephen King Limited, and Roller Disco Saturday Night
Producer and Host of Johnny D's Comedy.  He is a Columnist at FEARnet.com