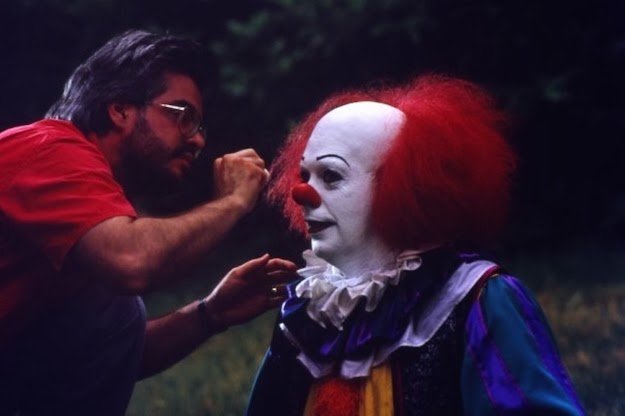 Steve Newton has reposted his 1990 article about the filming of IT, which he originally posted for Fangoria, #99.  He comments that the IT miniseries ended up "sucking."  Sadly, he's right.  However, the nice thing about covering the filming of IT was that he didn't yet know it was going to be dreadful.

About the evil clown he portrayed, Curry said,

“I won’t tell you what he turns into at the end,” adds Curry with a wink. “But basically he’s completely irredeemable; he’s the kind of chap that’s entirely without charm.”


“I off quite a few people here and there,” says Curry, “one way or another. But Pennywise turns out not to be that physical, actually—it’s mostly mental cruelty. What’s fun about him is that a clown is traditionally a very cosy, comforting kind of cheery image, and Pennywise is none of these things. I think of him all the time as a smile gone bad—that’s my image for him.”

Curry's joy in Pennywise  shined through his performance; he was great!  In fact, I  thought the first half  of the film was  pretty good.  It's when the story had to rely on the adult actors that it began to feel like a cheap melodrama.

Newton's Full article is at www.straight.com

Email ThisBlogThis!Share to TwitterShare to FacebookShare to Pinterest
Labels: Fangoria, IT miniseries, Links