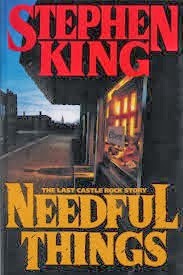 Yep, Carrie's good.  And it connects.  In fact, the book is so good it's produced a play, 2 movies, a television pilot, a musical and then a musical again.

Pet Sematary.  It may not work in as many mediums as Carrie, but it deserves at least an audio version!  It is a little hard to picture Pet Sematary the Musical.  However, there was a Pet Sematary 2.  Yes, there's a reason you probably haven't thought about it in a long time.  However, the book is dark, wonderfully written, intense and completely engrossing.

Dreamcatcher.  Frustrating at points, slow, long -- but still AWESOME! this book is quite underrated by fans.  That might be because we are more familiar with the movie version than the book.  The early portions of the novel remind me of IT in so many great way.  The novel had twists, turns that I really didn't see  coming.  Great stuff, and it was written by hand by the King of horror himself.  King originally titled this book, "Cancer" but his wife convinced him that was not a good idea.  I also love the early scenes at the cabin.  Read it -- you'll like it.

Needful Things.  I'm passionate about this book.  I think it's a strong novel; a really strong novel.  King weaves the stories of townspeople together masterfully.  What didn't work in Tommyknockers - a big cast -- worked very nicely in this novel. The character development is particularly strong in Needful Things.  From Polly's arthritis to the Alan's shadow puppets, these are people we connect with.  Not to mention, the novel has one of the freakiest scenes I've encountered.  Two women go at it with knives -- to their deaths -- in the middle of the street in broad daylight.  It's the end of Castle Rock, and a novel that totally sold me on Stephen King.