Notes On Under The Dome 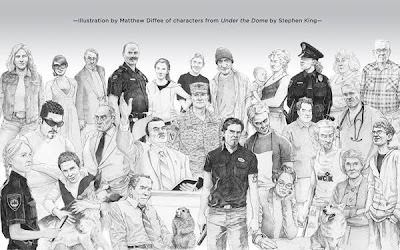 I don't do full book reviews. Leave that to Lilija. His review of Under The Dome is very good --http://www.liljas-library.com/showreview.php?id=221.
.
I offer only a few notes on Under The Dome, having finally blazed through the last three disks.
.
1. The ending. The ending felt sparse, almost rushed. Indeed, as some have noted, I would have liked a little more involvement with the aliens.
.
2. The theme reminds me of The Mosters Are Due On Maple Street, or perhaps even more pointedly, Star Trek's "Charlie X." The book has also been compared to an "adult version of Lord of the Flies." Appropriate, since it deals with how people change when there is not a larger body to enforce the rules.
.
3. There are a lot of Biblical references in this book. I didn't keep count, but at once point I found myself thinking, "Now where have I heard that?". . . OH YEAH! It's in the Bible! Gosh. Thankfully Big Jim is not the only one quoting Scripture.
.
4. Characters fate: Some readers made a lot about the bad guys not getting a bad enough ending. However, of the three wost evil doers, I felt the ending was very fitting in each case. I will not offer any spoilers! I will note that Big Jim's death was not a disappointment at all.
.
5. Genre: Is this scfi or horror? It's pretty classic Stephen King. Actually, it's neither. He leans toward the gross and the dark, but ultimately it's a drama about people in a certain situation. The aliens don't matter so much, because the real question is: How would people act if they were cut off from the world?
.
6. Was this similiar to The Stand? It's not The Stand. However, it does have similiar themes -- as promised. "God" does not appear as a character! that was pretty awesome in the Stand when the very finger of God came from the sky. Actually, other than the Dome itself, this novel removes itself from a lot of the supernatural elements found in The Stand.
.
7. Favorite Characters: Rusty Everett, Brenda Perkins.
.
8. I was glad King killed Lester Coggins off early. He was going to annoy me if I had to read an entire book with this guy as a lead character.
.
What I liked
The Dome
The fearless blood and guts
Dust collecting on the dome. I wouldn't have thought of that.
.
What I didn't Like:
.
You always have to include this in 3rd grade book reports! Actually, I can't think of anything. It could have been another 50-100 pages for me, and I would have enjoyed more explanation about the dome, the aliens and a little more cleaning up. But at some point King has to stop writing UTD and get started on that next DT book. (Hey, for a book that started with "The Cannibals" no one ate anyone else.)
.
Questions:
.
1. So, what stops the dome from reappearing in another part of the U.S.?
2. Does Barbie now get a Colonel's retirement pay?
3. Will Julia start another newspaper?
4. Did anyone do a body count?
5. How did that box make a dome?
6. Can I buy one of those boxes somewhere?
These questions are important to life.
.
Links:
..
Dome Journal, http://talkstephenking.blogspot.com/search/label/Dome%20Journal
UTD, Wikipedia, http://en.wikipedia.org/wiki/Under_the_Dome
Star Trek, Charlie X: http://www.imdb.com/title/tt0708424/synopsis