CARRIE: Gear Up For Total Destruction! 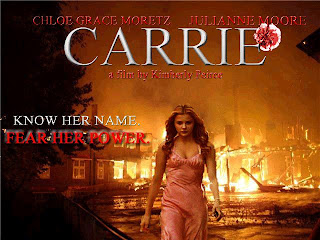 Meredith Woerner posted posted all kinds of wonderful spoilers for the upcoming Carrie at i09.com.  Actually, nothing is really spoiled. . . but the article offers some comforting insights, such as the promise that Carrie would stay true to King’s novel was a promise Kimberly Pierce kept.

If you remember, in the De Palma version, Carrie destroys her high school and then brings a delightful end to mama.  Well, this time “Carrie is going after the city.”  YES!  In fact, Woerner postulates that Carrie is going to burn the whole city right to the ground.

Woerner has this description of the soon to be released trailer:


An eagle-eye shot pans over a dark city. There's a voiceover of a man muttering about destruction and saying, "I don't want to say it as a conspiracy, but..." The camera pans over what can only be an old high school, the whole thing is in flames. The windows are bursting with flames, but the camera doesn't stop there; it moves forward. Fireballs of debris litter the street, and a girl speaks in a different voiceover, "Her Mother was a fanatic. I don't know how she lived with her." The camera zooms to street level, showing more and more destruction—the town is in flames. Finally, it stops on a girl standing in front of a bonfire in the town center. It's Carrie. She's covered in blood and looks completely freaked out. The End.

EDIT: Oh I forgot, someone is singing over the whole teaser. I believe it's Julianne Moore crooning the song her character sings to Carrie in the book. But that's not confirmed.


Moretz released this bit of viral marketing. If you call this number 207-404-2604 you will get a member of the White family on the phone. So give it a jingle and you'll be connected to either Carrie or her mother Margaret.