A Sequal To The Shining? 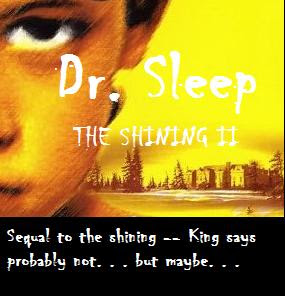 In a post titled, "Stephen King gets rock-star reception" Claude Peck at Talking Volumes gave quotes from a very interesting interview with Stephen King.
.
Peck says that King sees writing as “a sort of telepathy” in which an author may communicate directly -- and without complex technology -- with readers. "Dickens,” he said, “ still is sending from his mind to our minds.”
.
The Shining Sequal Not Likely
.
King says he thought about a sequel to "The Shining," titled "Dr. Sleep." But, he also says he doubts he'll ever write it. Which, actually, means nothing. A few years back he would have also said he wasn't going to do anything with the Cannibals. And, the Dark Tower series was done. So, it all depends on if the inspiration hits.
.
Some favorites:
.
King's favorite book: Lord of the Rings.
.
Favorite adaptation of his work: Shawshank Redemption
.
Favorite adaptation of The Shining: The mini-series.
.
Favorite Scary Character: Pennywise.
.
.
http://www.startribune.com/blogs/70429647.html?elr=KArksLckD8EQDUoaEyqyP4O:DW3ckUiD3aPc:_Yyc:aUgOy9cP3DieyckcUsI