IT is freaking me out 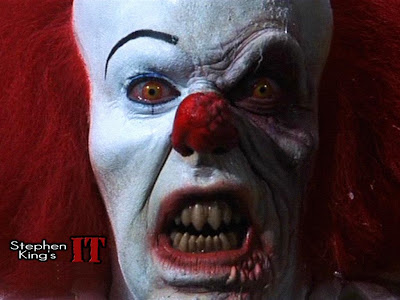 In High School I read IT, cover to cover -- I thought! Truth is, I think I read about half of IT and then trusted the mini-series to fill in the blanks. Realizing this, I returned to the book with interest.
.
Some have hinted that IT might be made into a feature length movie. I actually like the mini-series, campy special effects and all. (The warewolf was petty bad!) But as I read about the new movie, several viewers commented on the creepy sex scenes. Huh? A quick read over the second half. . . OH! That's what they're talking about!
.
So what is so creepy about the sex in IT? The book transitions throughout between the Loosers Club as children -- who first confront and wound IT -- and the same group as adults. The only female member of the Losers club is Bev; a young lady with a knack for abusive relationships because they mirror her father's abuse. At the end of the novel, though hinted at throughout the second half, Bev sleeps with all the members of the Loosers Club. In a sewer. One after another. Oh, wait. . . and this is not a scene about the adult Loosers Club -- these are the children.
.
As an adult Bev sleeps with Ben and Bill. And she remembers the event as a child. A memory she apparently suppressed. It was that act that deeply bonded the losers club together. It is the idea that they all lost their verginity at once -- together -- after fighting the monster that haunted their childhood.
.
This definately serves to weaken the novel. I find myself realizing how good a job the mini-series did in retelling the story, and not even hinting at this. Again, it's not a brief mention in the book, it's a sub-theme.
.
King once said that IT is everythng he knows about children. I have to say that there's a few things he must not know! Strange thing, I find this more discomforting than Gerald's Game, which is about a naked woman chained to a bed. But. . . Jessie is a grown naked woman.
.
Check out Beverly's Song on Yout Tube: http://www.youtube.com/watch?v=u8NwEq20obs

Email ThisBlogThis!Share to TwitterShare to FacebookShare to Pinterest
Labels: IT