Amber Grey: There's Something About Carrie

I enjoyed this article by Amber Grey -- you will, too.  Reposted from bellaonline.com with permission.  Thank you, Amber! 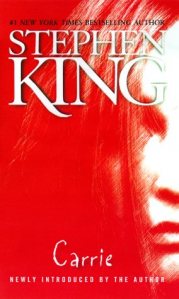 In horror films, fear is a universal feeling, which is what makes them fun to watch over and over again. Everyone has a favorite movie that gives them a special thrill and chill that can only happen while watching a horror film. But sometimes horror films, good horror films, can generate other feelings and "Carrie" (1976) is one of those films. If you were the outcast in high school, you felt sympathy for her and admittedly felt a little sinister towards the infamous prom scene when she sets the school's gymnasium on fire with her telekinesis powers.

Carrie's creator was the legendary Stephen King who published the novel when he was just twenty-six years old. Initially, when King finished the novel, he threw it away. He was completely convinced that it was an atrocious story. But it was his wife who rescued it and encouraged him to see if he could publish it. Hence, "Carrie" became his first published novel. Although, Carrie is described in the novel as a blond with acne and slightly overweight. However, in the movie's script, Carrie is painfully thin with dirty blonde hair to suggest a person of naive fragility.

It was suggested by Jack Fisk, the film's cinematographer and Sissy Spacek's husband, that Spacek audition for the role. However, Spacek failed to accurately impress the director, Brian De Palma and was cast as playing Christine, the leader of the pack who harasses Carrie throughout the film. Spacek, who was not one to take rejection lightly, went for a second audition. Only this time, Spacek went without make-up, applied Vaseline to her hair and wore a sailor dress her mother had made for her in the 7th grade. No doubt, her appearance enhanced her portrayal because Spacek won the role.

The then-27 year old actress was very committed to the role; so committed that she admitted to being comfortable with having actual pig's blood being used if so needed for the climactic prom scene. However, a substitute of corn syrup and food coloring was used instead of real blood. In the final scene where Carrie reaches up and grabs Sue's hand, Spacek also insisted for it to be her hand that reaches up and grab actress, Amy Irving's hand. Director Brian De Palma wanted to use a stunt person but could not argue with her, so he had Spacek's husband bury her deep enough to thrust her hand through a box.

With such a break-out debut as "Carrie", Spacek was on Hollywood's radar after the film's opening. Along with her co-star Piper Laurie, both actresses were nominated for Academy Awards for their roles. Eight years later, Spacek would win the Academy Award for her portrayal of Loretta Lynn in "Coal Miner's Daughter" (1980).

In 2010, with rumors of a remake striking every media outlet in Hollywood, Lindsay Lohan was mentioned as one to play the title role. While Stephen King was against the possible remake, Spacek approved of Lohan's casting. Despite her approval, further production news of a remake has not been updated.