"The Horros Of SK" AWESOME! 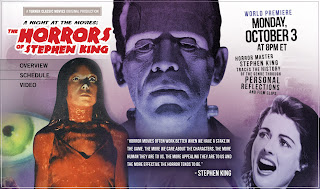 Okay, there are "spoilers" here.  But I don't think my essay is really going steal any thunder.  There is nothing like listening to King talk about these movies.

I absolutely loved TCM's "The Horrors Of Stephen King."  It is one full hour of King talking about horror films.  It's like having an updated visual version of Danse Macabre.  He says that the movie that scared him most was 1980 "The Changling."  He also notes that one of the great horror films that really works is "the Exorcist."  He seems to have been highly affected by Psycho, and references it often.  In fact, Psycho is identified as a "demon coaster."  Nice!

King's discussion of women in slasher films is interesting!  "He says that these movies are saying if you want to view women as victims, you do so at your peril, because a strong woman will vanquish a monster!"

It is also interesting that he was not given a preview of Carrie!  As King says, no one thought to let such a minor creature as the author a screening.

King says he is not really a fan of his own acting, going so far as to say he should have stopped acting at the level of community theater!  Funny.  But he does like to do cameo's in his movies, saying, "I think people kinda like it, it's kinda a Where's Waldo kinda thing."

King identifies some of his personal favorite horror movies.  It is no secret that he thinks Bambi is scary!  He also discusses the importance of the 1956 movie "Earth Verses The Flying Saucers" to his own life.

He spends quite a bit of time explaining the power of "The Night of the Living Dead."  That movie contained for him one of those moments that can't be repeated; where the film gives you a surprise, and in that moment everything changes!  (For me that happened when I first saw The Matrix.)  It is a moment you can't have back, even if you re watch the film.


"The first time you see night of the living dead. . . you are absolutely riveted.  The second time you're scared.  The third time, the film has lost something essential that it had the first time.  Now, people continue to go back and see Night of the Living Dead, but what they are experiencing is not horror, it is the memory of horror that they felt the first time that they saw it."

His excitement about The Amityville Horror is interesting.  He notes James Brolin's transformation as the film progresses.  What is the cause of Brolin's darkening?  The haunted house!  King does not directly make this connection, but I wonder if there is a sense that Amityville successfully carries out what Kubrick's "The Shining" did not.  King explains, "Kubrick saw the haunting coming from Jack Torrance; where as I always saw it coming from outside."  Now, take Amityville, which shows a normal man who moves in to a haunted house who is then tortured and changed by the ghosts in that house.

He really liked Dee Wallace in Cujo, and thought she deserved more recognition than she got.  Oh boy, and King really likes the Blair Witch project!

King not so favorites:

The Shining: I was glad that King took time to explain a little more exactly what his frustrations with Kubrick's "The Shining" entail.  At the heart of it is a theological disagreement.  Kubrick saw ghosts as a hopeful sign of life after death. In a conversation with Kubrick, King suggested that ghosts may not present the hopeful side of life after death, but they could point toward hell.

King gives the following comparison between the book at the movie: "In my novel, the hotel burns.  In Kubrick's movie, the hotel freezes.  It's the difference between warmth and cold."  He does admit that the images are "striking" though those are surface.  In fact, he describes the movie as a car with no engine.

King also notes that he is not usually moved by werewolf's.  Reason?  Well, the transformation is hard to accept.  (A Twilight dig?  He does say that Twilight is "I was a teenage vampire.").  King also did not find Bella Lugosi particularly frightening as Dracula.  That doesn't mean Lugosi wasn't scary, it just didn't scare King.

King notes the work of William Castle! Castle was known for using all kinds of gimmicks to hype his films.  Why did Castle need all the gimmicks?  Because, as King points out, his films weren't really all that good.  But, Stephen King points out that Castle was a very talented man and notes his work on Rosemary's Baby.  (see my article on Stephen King and William Castle here)

This documentary had a lot of focus on The Shining.  King points out what beats at the center of The Shining -- Evil spirits want Danny because of Danny's powers.  It seems from the clips and news we've gotten thus far, Dr. Sleep carries this a bit further.  Now there are creatures moving across America, seeking people like Danny.

So the fear factor is upped a bit because now Danny doesn't have to go to a hotel to encounter the bad spirits they're seeking him out.

It could have been longer:

The New York Times observed, "The frustrating part of the special, though it gets better as it goes along, is that too often it shows just the quickest snippets from films King is referencing. Longer clips would have meant less King, but they would have better illustrated his points." Or, they could have just given the documentary an extra half hour.

My favorite quote: "I never did get behind the idea of the vampire as a love object." Yes! Give is scary vamps!