Creepshow: The Most Fun You'll Have Being Scared! 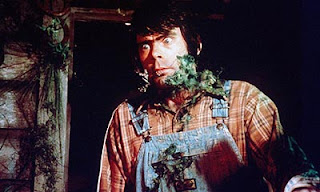 I really like Anna Adams article "My Life In Horror: Creepshow."  Article HERE

Before giving a more detailed (an energetic) review of Creepshow, Adams opens with this:

I saw the box for this film back when Terry's Holiday Market in Olivia was still Tersteeg's, and had a VHS selection for rental at the front of the store. Now that I think about it, it was an extremely effective setup for parents---instead of begging for candy bars, we'd always just bolt over to the videos to check out the boxes, and this one was a jackpot. I wanted to see it simply on the strength of the front cover: the little theater skeleton hanging out of the box office, cautioning us, "the most fun you'll ever have . . . BEING SCARED!" I have to agree; this film is seriously one of the most fun in my collection.


About his role in this film, King recently said in the TCM documentary "The Horrors Of Stephen King" that he is not a fan of his own acting.  In fact, he goes so far as to say he should have stopped acting at the level of community theater!  Oh well, I also enjoy this movie.  My like for Creepshow is ever growing.