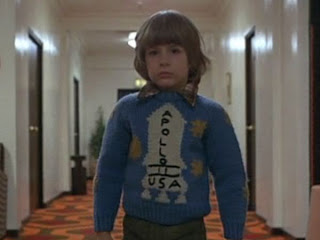 Room 237 is the room number that Danny Torrance is told not to enter in Kubrick's movie version of "The Shining."  It is also the title Rodney Ascher's not documentary about obsessive fans of The Shining.

Wait!  Are there obsessive fans of The Shining?  Well, I didn't know it until last week.  I was doing some research for another article, and ran into a series of websites that blew my mind.  People had counted frames and done all sorts of cray stuff.  I mean, it's a level of crazy I'm familiar with -- but in my line of work it's usually people who have gone a little nuts with the last book of the Bible.

Entertainment Weekly cites one fan who believes Kubrick directed the Apollo moon landings while shooting 2001 and hid clues in The Shining.  Jason Bailey notes that this makes The Shining "a giant coded message to tell the world about the ruse."  So The Shining is not about Jack losing his mind in a haunted Hotel. . . it's an allegory of the moon landing.  Of course!

Bailey cites Sundance programmer Trevor Groth saying, "“These obsessive people dissect The Shining, and they’ve watched it thousands of times, all finding their own coded meaning and language in it.” Like how the architecture of the Overlook Hotel doesn’t make any sense, with hallways leading to places that should technically be outside, and windows that show sunlight streaming in even though they are enclosed in the middle of the building… ?"

One blogger has found the hedge animals from the novel in the movie.  Yep -- they're there!  Check it out HERE.  This blogger also discusses color changes in the movie, time codes and durations, and VW's.  I kid you not.  So if you want to count frames and find meaning in that, go for it.

And I thought Trekkies (Trekkers?) were obsessed.