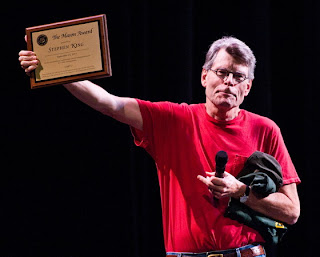 This is going to be fun.

I want to post some short articles on why I think the constant reader is -- constant.  Why do we come back to King when the world is full of wonderful writers?  I saw a new Grisham book today, but realized I don't have time to read it.  I mean, the Stand comes out next month!  And I want to read the Library police.  When it comes to fiction, I think King is simply the best.  Why?

You can smell fear dripping off some writers.  They're scared to kill a character off; and when they do, they have to bring them back.  Star Trek boldly killed Spock -- then they blinked and brought him back.  King doesn't play stupid games with the reader!

The courage of the writer is important for the following reasons:
A writer needs to get out of the way and let the story tell itself. They must be willing to kill characters and bring misery on people they've fallen in love with, so that stupid story can unravel the way it's supposed to.   I think that sometimes the story heads in directions that even Stephen King doesn't expect!

This comes partly because King does not write with an outline.  In fact, he says stories that didn't work for him were the ones he plotted.

Courage also means that he lets the characters show us uncomfortable sides of humanity.  Were there moments you felt for Oswald?  Or were there times you hated Roland?  That's because characters are not just good and bad, the best of them have depth.  Allowing characters to live means that they sometimes curse, hold opinions the author does not and exhibit both noble and dark behavior.


Here are 5 novels that show the courage of a writer:

1. The Stand.  One reason we love The Stand is not only is it big, you actually don't know what's going to happen next!  Characters you think are on King's cutting block hang in there to the end.  Of course, some of us have read The Stand so many times, it has lost that initial power of suspense.

2. Cujo.  I don't want to ruin the book for you, but it is gutsy!  King once again allows the story to tell itself without getting in the way, and the result is wonderful.

3. Pet Sematary.  This novel is full of surprises -- unless you watched the movie first!  (Where is the audio?)  The novel is gripping because it is the story of a typical nuclear family dealing with the worst thing in the world for a parent -- the death of a child.  But the novel does not take expected directions!  And again, those dark endings take nerves of steel.

4. The Mist.  The novella has the courage to leave the ending open!  I think that takes real courage for a writer to not eel the need to fully conclude the story.  Of course, sense it is told in first person, King could not exactly kill his main character off.

5. Thinner.  While not my favorite novel, it's strength is partially in the fearless writing of Stephen King.  He follows that novel down uncomfortable avenues and let's us cringe with him.  And then, as usual, once he's got us all cringing and scared, he laughs his head off.

TELL ME:
So, what novels do you think reveal Kings courage as a writer?
Or, perhaps even more fun, what novels did he totally wimp out on? !