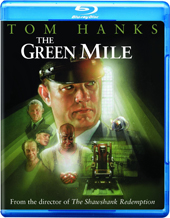 Sometimes I have to read a review to find out what I don't like about movies I really like.  I didn't ko there was a problem with the novel Christine until I read all the reviews.  Just reading the book, I was entrhalled.  But now mye yes have been opened; I should not have enjoyed the book with such gitty pleasure!

Now, I thought the Green Mile was awesome!  I mean, absolutely wonderful.  I didn't know there was a stone to be thrown at the Green Mile.  But, turns out, there is!  DVD File has a very good review of the Green Mile.  You can read it HERE.  It is generally all positive -- except for the parts that aren't so positive.

So what could be wrong with the Green Mile, asked myself.  Only, I asked too late!  I had already read the review.  It caught me off guard.  The words had to settle in.

. . . Too long?  the movie was too long?  That's the complaint?!  It might be long because it was faithful to the book.  But, that aside, I must say that as a fan, I didn't know it was too long.  It didn't feel too long!  But dog gone it, next time I watch that movie, I'll be sure to note with disgust how long it is.  I'll fold my arms and huff and how much time I'm spending enjoying this wonderful movie.  After all, movies should all fit inside the 2 hour time frame.  That was abd of the Green MIle to give ust hat extra hour of pleasure!


At over three hours, The Green Mile is not a quick watch, and admittedly the pacing does occasionally lapse into the laborious."

Now see, I'd-a never known that without them telling me!  My senses didn't pick up on it.  I just sat there and enjoyed the whole thing, like a big fool.  But now I've been schooled.


Scenes are often drawn out near the breaking point, and the consistent sameness in tone often stunts the film's drama and suspense.

Huh?  The suspense was stunted?  I could have been pulled even further off the edge of my seat than I was?  May I suggest that if scenes are drawn out to the "breaking point" it might be because you are in so much suspense waiting for what's going to happen next.


Even some of the more horrific execution scenes and the late-night escape sequence are not quite as exciting as one would expect.


While the film does have its humorous moments, it is also often too solemn for its own good, unlike Shawshank, which better balanced the oppressive prison setting with humor, pathos, and suspense.

And now we've been told!  Only, I hadn't thought to sit there and compare the two.  I just enjoyed what humor ther was as it was sprung on me.  Dumb me!  I needed to be keeping my notes at hand.

Next time I find myself really enjoying a good movie, I'll be sure to ask a reviewer why it stinks ahead of time.  I will not so foolishly enjoy myself.