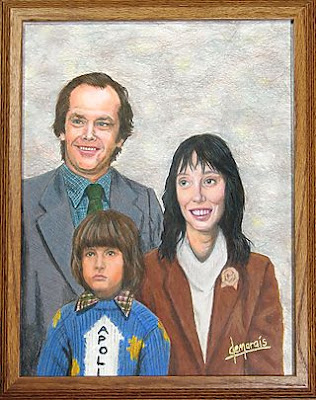 rediff movies has an interesting article on movies that make writers sulk. Of course, in the list is the Kubrick/King clash over The Shining.
.
It turns out, the first novel adapted for the big screen was 1924's Greed. Only problem was, the movie was 16 hours long! It was edited down to two hours -- because they hadn't heard of the mini series!
.
Anyway, the article notes "Kubrick, again. Clearly the best horror film of all time wasn't enough for author Stephen King, who always felt the Kubrick film changed his novel too much, going so far as to say that he hated it, especially Jack Nicholson in it. King himself watched over a TV miniseries in the late 90s -- Stephen King's The Shining -- and the end result was a damp squib. Kubrick, who passed away a couple of years later, surely had the last laugh."
.
Which leads to a question: Is Kubrick's version of the novel really that much better than King's? Personally, I like both -- but I prefer King's. But this makes me wonder how others feel. So, let's take it to the polls. Go ahead and vote on the right.
.
http://movies.rediff.com/slide-show/2010/jan/04/slide-show-1-when-filmmakers-made-writers-sulk.htm#contentTop