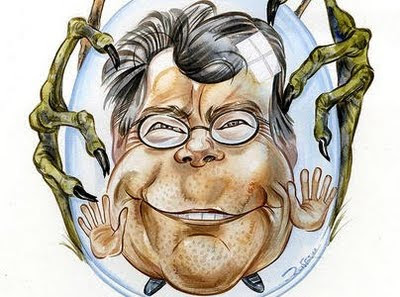 I found Jeff Kline's article in The Ledger absolutely Hilarious. Titled, "Favorite Characters Die Off in End of King's Book" Kline gives quotes from the ledger's book club, some of whom are disappointed with UTD. But, it begs the question. . . what were they expecting? Are these people aware that King wrote Pet Sematary? Or Cujo?
.
But, here's some of what the whining is about:
.
The First set of complaints: It's too much like a Stephen King novel!
.
"It's too long, has too much violence and way too much bad language. The cast of characters is long and it gets hard to remember who is who, although King nicely provides a roster of town residents. But nearly all the characters the reader comes to like are killed off."
.
Long, violence, bad langauge. All of which typify a Stephen King novel! Kline cites Sally Miller on the cussing issue: "I do think he's a great story teller, but I don't know why he finds it necessary to add so much profanity in his books." Look, I don't cuss at all. Sometimes King has characters cussing in a context I don't think is natural for that character. However, he feels that for his characters to be real, they need to talk real. I can respect that.
.
The Second complaint: It doesn't measure up to The Stand.
.
Kline cites Ada Lavin who liked the book but was "disappointed at the same time. This is far from his best." Kline says that The Stand is her favorite, which she said was "more suspenseful in a fraction of the size." WAIT A MINUTE! Did anyone do a page count here? First of all, The Stand is not a fraction of the size of UTD? -- It's LONGER! Second, does anyone remember a few deaths taking place in The Stand? Like, uh, all of America! Plus Nick, plus Glenn, plus... it goes on and on (the death list).
.
The Third complaint: The hedgehog dies.
.
Kline notes Joy Banks and says, "She was especially upset at the fate of the hedgehog in the very beginning of the book, which put her in an off mood for the remainder of the story."
.
Are you serious?! What was supposed to happen to the hedgehog? It just feels the wind of the dome as it slams down? She's weepy over the hedgehog, what about the lady who got her hand chopped off? (That was cool) But, Kline then says that Banks didn't read the whole book. "After starting the book, Banks skipped roughly 600 pages, reading the last 200. "I don't feel like I missed anything." I thought she was in a "off mood for the remainder of the story." She skipped 600 pages! And people who say they don't think they missed anything. . . how would they know?
.
The Fourth complaint: It's Not A How To Manuel For Dome Building
.
Kline bluntly says, "As a science-fiction book, panelists found it lacking." He quotes Michael Pimentel, "In the very beginning of the book I was really happy. Then it went to 200 pages, then 300, then 400. Now you're really overdoing it. You're not explaining what is going on and I'm getting really tired. I want to know what this dome is and I want to know it in the beginning. Once I got to the 300s, my excitement starting going down. It started becoming labored reading." So this guy actually thought the book was a sci-fi novel that would explain the workings of a mysterious Dome? I don't care how the Dome works! The Dome sets the stage for what happens inside. Remember in the Cannibals when the doors got locked and no one could get out? Same thing, just a bigger scale.
.
Hitchcock would have called the Dome a "McGuffin." "[We] have a name in the studio, and we call it the 'MacGuffin.' It is the mechanical element that usually crops up in any story. In crook stories it is almost always the necklace and in spy stories it is most always the papers." In another interview, he explained, "It might be a Scottish name, taken from a story about two men in a train. One man says, 'What's that package up there in the baggage rack?' And the other answers, 'Oh that's a McGuffin.' The first one asks, 'What's a McGuffin?' 'Well,' the other man says, 'It's an apparatus for trapping lions in the Scottish Highlands.' The first man says, 'But there are no lions in the Scottish Highlands,' and the other one answers 'Well, then that's no McGuffin!' So you see, a McGuffin is nothing at all." http://en.wikipedia.org/wiki/MacGuffin.
.
You can read Kline's full article here: http://www.theledger.com/article/20100124/NEWS/1245026/1326?Title=All-of-King-s-Characters-Die-Off-in-End-of-New-Book

Email ThisBlogThis!Share to TwitterShare to FacebookShare to Pinterest
Labels: Alfred Hitchcock, Links, Under The Dome, whining