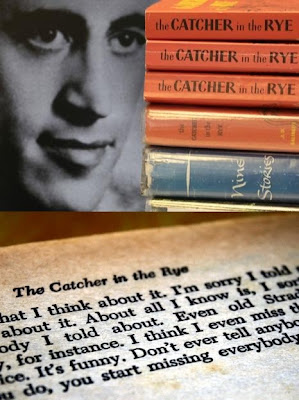 When I was in 6th grade our English teacher inflicted Catcher In The Rye on us. Or, so we thought. We hated reading. But as we began to dig in, we couldn't believe what our teacher had put in our 6th grade hands! This book was full of wonderful, glorious, cussing. Stuff our parents wouldn't approve of. Open rebelion against authority. We couldn't believe the adults at our school had given this to us.
.
King's Post:
Yesterday, January 27, 2010, the author of Cathcer in the Rye, J.D. Salinger died. Stephen King paid tribute to him in his an Entertainment Weekly article. King notes that he wasn't a big Salinger fan, but he still feels sad the way yhou feel when finding out "an eccentric, short-tempered, but often fascinating uncle had passed away."
.
King noted that Salinger was one of the great post World War Two writers. And, he notes that "in Holden Caulfield — maybe the greatest American-boy narrator since Huck Finn — he created an authentic Voice of the Age: funny, anxious, at odds with himself, and badly lost." That is what was wonderful about Catcher in the Rye.
.
Of course, Salinger dived into a private life after Catcher in the Rye. He continued to write -- or said he did -- but only for himself. King notes, "Salinger’s death may answer one question that has intrigued readers, writers, and critics for nearly half a century — what literary trove of unpublished work may he have left behind? Much? Some? Or none? Salinger is gone, but if we’re lucky, he may have more to say, even so."
.
By the way, I have never reread Catcher in the Rye. Even though it was a wonderful experience, I never felt the need to return. So, I wasn't a fan of Salinger, but Cather In the Rye did have a huge impact on me.
.
Banned
King may feel some connection to Salinger because both of them have had to deal with being banned.
.
The Shining
Notice in The Shining, Kubrick has Wendy reading Catcher In The Rye. I have no idea if it means anything. However, visual memory speculates, "It seems unlikely that the content of the novel has any bearing, but the front and back cover of the paperback (printed in the same way for decades) are exactly the same--another doubling/mirroring element. The covers are red with gold lettering, as in "redrum" and "goldroom." Red is color that signifies blood and thus death, gold is related to the goldrush of the American westward expansion." http://www.visual-memory.co.uk/faq/html/shining/shining.html
.
Kings post is here:
http://shelf-life.ew.com/2010/01/28/stephen-king-j-d-salinger/

Email ThisBlogThis!Share to TwitterShare to FacebookShare to Pinterest
Labels: Links, Other Writers, The Shining