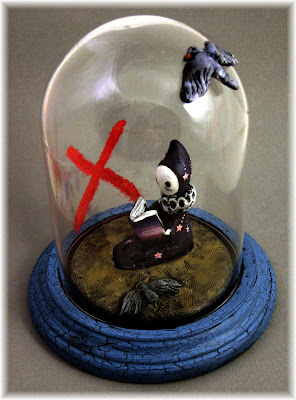 Is Stephen King Out Of Touch?
.
"Stephen King is really out of touch," I thought as I listened to Under The Dome. King has Reverend Lester Coggins practice self-flagellation. That is, he beats himself with a rope -- 12 knots representing the 12 apostles (or 12 tribes?)
.
Self-flagellation is a rather obsecure act of punishing oneself usually for religious reasons.
.
1. It is done by some to identify with the suffering of Christ. In the Philippines I have heard of people being crucified by choice.
.
2. It is also practiced for humility.
.
3. It is also done to atone for personal sin. This seems to be Coggin's motivation. He feels guilt for two things: First his involvement with Big Jim and the drug operation, and second for his use of pronography.
.
As a pastor, I'm familiar with the act, but didn't really think anyone did that. "Does King think religious people actually do this?" I found msyelf asking. It's like those people who assume I own a copy of Mel Gibson's The Passion Of The Christ. Right. . . that's what my family does for fun. . . we eat dinner and then watch Jesus get beat to death. Let's just say, I don't own a copy.
.
It felt like that same kind of misunderstanding that King was making about Christians. Not that he seemed to be saying all Christians do this, but because he would think any Christian in the modern would would still do this seemed out of touch to me.
.
King Is Actually At The Top Of His Game:
.
Then I read a reuters today! They reported that the very popular Pope John Paul the Second practiced self-flaggelation with a belt. he did this, the article said, to "imitate Christ's suffering." The article, which is citing an upcoming book, also said John Paul, "engaged in a practice known as mortification, the self-infliction of pain in order to feel closer to God, whipping himself with a belt that he kept in his closet. The book also said that when he was a bishop, he often slept on the bare floor so he could practice self-denial and asceticism."
.
I understand the act of self-denial. That's actually Biblcial -- The idea behind fasting. Of course, in the Old Testament you have a lot more feasts than you do fasts!
.
Now this is where King gets spooky. He has the ability to take a practice and then show it twisted out of proportion. Like a cult leader might actually do. Suffice to say, after reading the article today I found myself much more willing at accept King's Rev. Coggin's as a realistic character. Now. . . how Big Jim ended up in his church is another story.
.
Article: Pope John Paul flagellated himself, new book says: http://www.reuters.com/article/idUSTRE60P46G20100126
.
picture: http://3.bp.blogspot.com/_5xroHpIAk3Y/Sz2U01UYUtI/AAAAAAAAC_8/4_qgkNAwJRQ/s1600-h/Poppet+Reads+Stephen+King+Under+the+Dome+Lisa+Snellings+detail.JPG

Email ThisBlogThis!Share to TwitterShare to FacebookShare to Pinterest
Labels: Dome Journal, Religion, Under The Dome