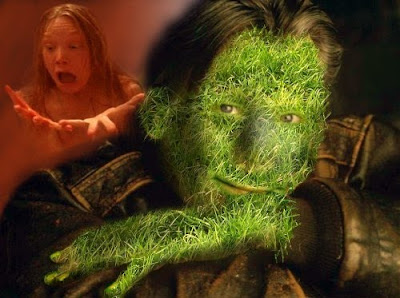 I realized the other day that what makes King a strong writer is that he's got a lot of guts. Fearless courage of a weriter. Two examples:
.
First, he's not a afraid to let his hero's get in a real mess. Most writers would work to keep Barbie out of the jail cell, but King drops him right in. It makes the novel more difficult. And it paints King in a tighter corner. Of course, it's a lot more fun to read. . . but it takes guts for a writer to let his hero's get in a real mess.
.
Second, he's not afraid to introduce characters with limitations. The Stand is a good example of this. Nick in particular would scare me away as a writer. How do you deal with a deaf mute? Well, King did it brilliantly!
.
.And here's a quick list of things that took guts as a writer:
1. Destroying Castle Rock.
2. The end of the Dark Tower was gutsy.
3. Revising The Stand.
4. The sex scene in IT
5. Geralds Game eclipse day.
6. Letting Paul Sheldon live in Misery.
7. A wheelchair bound hero in Cycle... (Same with Susannah Dean)
8. Writing himself into the Dark Tower.
9. Switching viewpoints in Christine.
10. Writing a book with another author.
11. Suffer the Childen. Just the story itself is gutsy.
.
on a more personal note, it took guts:
1. To get off drugs and go sober.
2. To pull Rage from publication.
3. To write Dreamcatcher by hand.
4. To speak openly about politics.
5. To say what he thinks of Twilight.
6. To use money for a purpose.
7. Sueing to get his name off of Lawnmowerman 2.
8. To publish under the Bachman name.

Email ThisBlogThis!Share to TwitterShare to FacebookShare to Pinterest
Labels: Writing