S.K. on a Shooter Jennings Album 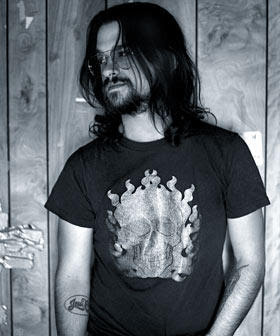 Interesting news today from fangoria.
.
James Zahn writes, "Legendary genre author and FANGORIA contributor STEPHEN KING will be appearing on Jennings' forthcoming concept album, BLACK RIBBONS - due out March 2nd on Black Country Rock/Rocket Science Ventures. King will provide the voice of "Will O' The Wisp," a late-night talk radio host who is in the last hour of his final broadcast before the airwaves are overtaken by "government-approved and regulated transmissions."
.
With nothing left to lose, the radio host lets loose with a series of rants, punctuating his diatribes with selections from the discography of (Jennings' new band) Hierophant. Throughout the album's 14 songs, Will O' The Wisp flits in and out, painting an apocalyptic picture of what America could become in the not-so-distant future, while offering his loyal listeners-from whom he is about to be permanently cut off-the unvarnished truth.
.
http://www.fangoria.com/musick/musick-news/4924-author-stephen-king-to-appear-on-new-shooter-jennings-album.html

Email ThisBlogThis!Share to TwitterShare to FacebookShare to Pinterest
Labels: Music