Stephen King And The Simpsons, 2 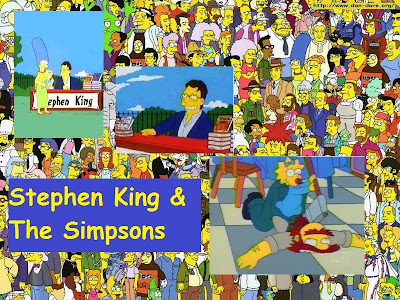 I like the Simpsons. I like Stephen King. What's better than when the Simpsons steal an idea from Mr. King?
.
1. In 2000, King was a guest on the Simpsons episode: Insane Clown Poppy.
Marge: So, Mr King, what tale of horror and the macabre are you working on now?
Stephen King: Actually, I'm taking a break from horror for the time being.
Marge: Oh, that's too bad.
Stephen King: At the moment I'm working on a biography of Benjamin Franklin. He was a fascinating man who discovered electricity, and used it to torture children and green mountain men. And that key he tied to a kite - it opened the gates to HELL.
Marge: Well, when you go back to horror will you let me know?
Stephen King: Will do. [writes down a note: CALL MARGE RE: HORROR]
.
http://us.imdb.com/title/tt0701137/quotes
.
2. The Simpsons did a parody of The Shining (called The Shinning) in Halloween Treehouse of Horror V.
.
http://www.youtube.com/watch?v=5yGJGTjV2WE
.
3. According to stephenking.grimpuppy.com, King has had references in 6 episodes and had a cameo in a 7th (noted above).
.
4. In the Simpsons episode the Joy of Sect Homer and Bart see a bookstore called "Just King and Crichton." That's funny! I wouldn't mind running that bookstore.
.
5. Wikipeida notes, "In the episode "Dude, Where's My Ranch?", Moe asks "Ya ever see the movie Misery?", to which an injured man replies "Actually, no." Moe then says "Then this will all be new to you." and the two drive off while menacing music plays." http://en.wikipedia.org/wiki/Stephen_King_in_popular_culture#The_Simpsons
.
Obviously the most cited book by the Simpsons is the Shining. They seem to love it! I laugh at all the people who say the Simpsons should sue S.K. for his use of a Dome. There seems to be a pretty good working relationship between the two.
.
I just found this link, which is really cool. It's Stephen King in popular culture: http://en.wikipedia.org/wiki/Stephen_King_in_popular_culture

Email ThisBlogThis!Share to TwitterShare to FacebookShare to Pinterest
Labels: Cultural References, Parody, The Shining, The Simpsons