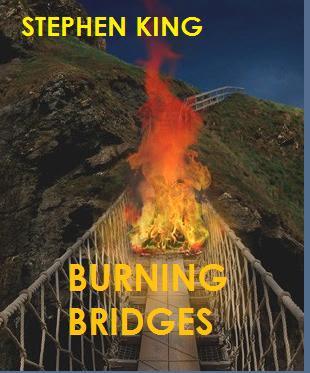 .
NO, THERE IS NOT REALLY A BOOK TITLED BURNING BRIDGES. . . READ ON --
.
I was looking through the wonderful selection of Stephen King audio books at audioeditions.com. They have it all! Even a discounted audio edition of Under The Dome. (But, I'm holding out for Walmart, Target and Aamazon to come up with a $5 edition of the audio).
.
What should I find as I searched? A new audio book! A book I'd never even heard of. It's called, "Burning Bridges." You remember that one, right? No? How could constant reader not remember a King book called Burning Bridges?
.
Probably because this book is supposed to be titled: "Building Bridges."
.
BUT. . . I only noted this because how the mistake came about is understandable. I mean, who would think of King giving a speach called Building Bridges. It seems much more likely he would write a novel called: Burning Bridges!
.

Yes, Trashcan man -- burn them!
.
By the way, notice that even the picture (on the audioeditions website) is titled: "Burning Bridges."
.
Unfortunately, audio editions pulled this title. I don't know why! Anyway, the link used to be here:
http://www.audioeditions.com/audio-book.cfm/title/Burning-Bridges/pcode/E1P986
.
It begs the question: Anyone out there want to make up a synopsis for this?