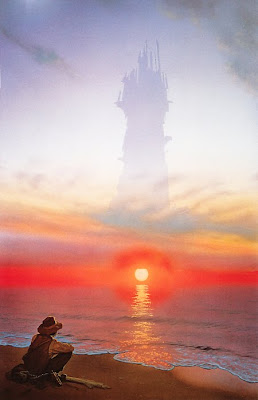 I thought maybe, jsut maybe, Ka Is A Wheel referred to a new book coming out or perhaps the new comic book series based on the Gunslinger. It appears it was about a video game.
.
A VIDEO GAME! Come on. This takes some soul searching. Am I really ready to stop playing Civilization 4? How about a Dark Tower game built on the Civ engine? (Of course, that bombed with Cilivization)
.
Eric Caoili writes, "the project looks like an online interactive game (my guess) centered around the Tet Corporation's secret war with North Central Positronics and Sombra Corporation, both companies under control by Insomnia/The Dark Tower villain Crimson King."
...............................http://www.gamesetwatch.com/2009/10/the_dark_tower_game_teased.php
...............................and see http://www.gamasutra.com/php-bin/news_index.php?story=25759
.
He also notes that this will probably be the first in a series of games.
.
Robin Furth is the director of the game, which makes it a hopeful offering since she wrote the Stephen King companion. In other words -- she'll get the details right! And when it comes to the Dark Tower, there's a lot of details to keep up with!
.
But my hopes were up for another book. Maybe a tie in book. I mean, it was possible, right? Maybe? Just because Mr. King has been busy finishing that massive novel and other projects this year, you never know what 1,000 page nugget he came up with on his free time.
.
How about a Dark Tower book that opens, "Let's just pretend the last 20 pages of Dark Tower 7 never happened. . ."