The Joy Of A Long Novel 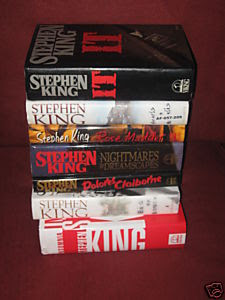 My wife mentioned last night that the car was full of cd's. "I know. I'm listening to a bunch of things, because I'm afraid to start anything big because I know Under The Dome is coming out." I have even resisted the urge to start Duma Key again. Just lots of Garriosn Keillor and other short stuff.
.
The Complaining:
.
King gets plenty of razzing about the size of his novels. Doubleday even forced him to chop up The Stand. Naughty them! David Fried suggests that the "biggest concern" for most readers approaching UTD will be its "intimidating length."
.
Jarrett Skorup at examiner.com has an article titled "The Horror of It All: Congress, the Founders and Stephen King."
.
Now what does Congress, the Founders and Stephen King have in common? Skorup writes, "This bill isn’t just longer than a Stephen King novel, it’s also scarier, because aside from the title, this tome is all non-fiction. Congress could benefit from a good editor though, because in 800 fewer pages Stephen King wiped out 99 percent of Earth’s population, rebuilt society, created a dramatic good vs. evil confrontation and nuked Las Vegas. HR 3962 only manages to give the government control of 17 percent of the U.S. economy, and the health care choices of every American." http://www.examiner.com/x-17336-Midland-County-Public-Policy-Examiner~y2009m10d30-The-Horror-of-It-All--Congress-the-Founders-and-Stephen-King
.
Interesting comparrison.
.
To press his point on how big the healthcare bill is -- he put it next to a copy of The Stand (it towers over the novel).
.
Strength of a longer novel
.
One reason I'm looking forward to Under th Dome is because it is long. In a closing note to UTD, King thanks Nan Graham her editing his novel “from the original dinosaur to a beast of slightly more manageable size.” (Hopefully tis was not a Doubleday style chop job).
.

I appreciate King's longer novels for several reasons. For one thing, King doesn't hold back. He writes on to what some say is self indulgance; but really he is giving the reader a gift. Chopped up stories are frustrating. If you don't really want to read -- then don't read! But don't complain that King let's the bowl of ice-cream spill over.
.
King takes the time to walk us through the long tunnel with Larry Underwood. The ability to weave the story and pull lots of loose ends together is magnified when the story is longer. He takes time to set up his story, to give us detailed characters and then allows us to watch him play with them. And truth is, that's what a good novel does -- it allows us to watch a child play with his toys (in this case, toys he has built).
.
King is certainly not alone in his super long novels. Charles Dickens consistently wrote huge books -- by hand! One of my favorite authors is Ken Follett (Pillars of the Earth and World Without End and both fantastic).
.
A well written, long novel lingers in the mind. You live with that novel, think about the characters when you're not reading, and feel like you personally know a little group of people that other friends and family don't even know exist. When you meet another person who's read that book, you immediately feel a deep connection with them -- "Oh! You know Stu! And Larry? What did you think of Nick?"
.
Specifically:
.
My favorite long novels obviously include The Stand and IT. But also, right in their heels, is Needful Things. The reason the movie Needful Things fails so badly is that King's plot couldn't be jammed onto the screen. (Same reason King doesn't usually allow the audio edition of his novels to be abridged -- except for Thinner and Desperation.) Duma Key was a delightfully long read, as was Desperation. None of htese are short books -- all of them are worth every page.
.
I suspect that those who complain about the length of King's novels are in truth lazy readers. Or overwhelmed. Of course a book reviewer is annoyed when handed a gigantic novel -- because they have other things thing need to be reading as well. But for the constant reader, a long novel is a gift.

Email ThisBlogThis!Share to TwitterShare to FacebookShare to Pinterest
Labels: Duma Key, IT, Needful Things, Other Writers, Under The Dome