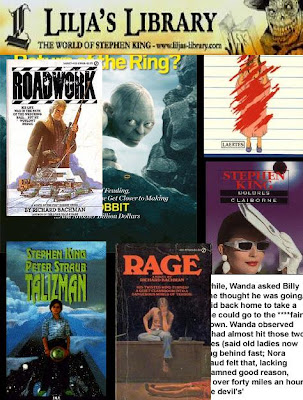 So Lilja's Library is part of a contest to find the text of Stephen King's new novel hidden all over the web. At least 2 texts are at Lilja's. Which, has meant, I've spent bunches of time digging around on that website. Usually I check the news and always enjoy reading the insightful reviews.
.
But,t he contest has caused me to dig a bit deeper. I THOUGHT I knew was was over at Lilja's Library, but I was wrong! Entire pages, sections, I had previously overlooked. This thing is huge! I know the upcoming book is also massive, and the depth of the website certainly lends credibility as a Stephen King scholar.
.
So, here's just a bit of what I found I didn't know was there:
.
1. The "International King" page is outstanding. Bookcoves from foreign editions. I was surprised how much I liked this page. Interesting, often the international bookcovers are a lot better than the American. (Polish Nightmares and Dreamscapes is pretty good)
.
2. The "History" page is cool. Several images that show what the web used to look like, and in particular Lilja's Library.
.
3. King's Columns is also interesting. Not just links, but row after row of Entertainment Weekly covers. Also, links to King's Garbage Truck, 1969 and 1970. Wow -- like keeping history on the web.
.
So, did I find the hidden text? Nope. But, when it comes to King fans, I realized even more why Lilja's is the best. From a sheerly historical point of view, it is lightyears ahead of King's own site.