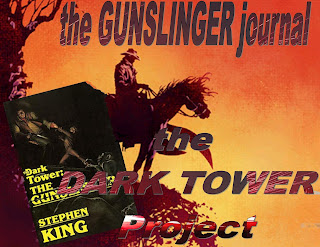 The journal entries are not intended to be reviews of the books.  They are simply my notes and observations as I journey through various King novels.  I will leave the work of review to the outstanding Lilja at Lilja’s Library.

I have started a familiar journey toward the Dark Tower, traveling once again with the Gunslinger as he chases the man in black.

Here are some initial impressions:

1. I like the style better than I remember.  It does read like someone who really wants to be very serious!  This is before King really had the freedom in his writing to play games and crack lots of jokes at himself.  The light heartedness we sometimes encounter in the narration of other books is not yet present.

But I like the heavy serious tone that novel strikes.  It does feel like someone who has lots to say. . . but isn’t sure just yet what it is they have!  That’s okay, I’m game, Mr. King!  If you want to be serious, I’ll be serious and play along.  It is the joy of reading a young mans work.

2. In the Dark Tower, King is “world building.”  But he keeps the reader in suspense in this novel – what world are we on?  Where are we?  Is this the afterlife?  The man in black mentions the world next door – I like that phrase.  The world of the dark tower is one that parallels our own, yet has some drastic differences.  It is a world that has moved on – a world in flux, or change.  Though there are familiar things – birds and farmers and guns – there are also some missing items.  Government?   It appears each town is run on its own.  It is a lawless world where dark men can come to town and raise the dead.  I imagine the book of Judges in the Bible.

3. Nineteen.  The key word the dark man gives to drawing out information from the man he raised (Norton) from the dead is “nineteen.”  A theme that King will play with throughout the series, and his own writing.

4. The book is difficult to follow.  It starts with the gunslinger meeting a farmer.  The farmer wants to know about Tull.  This leads to a flashback.   But there are scene shifts within the flashback – points of view given that are not directly the gunslingers.  This gets a little complicated, I think.  I'll discuss that  further below.

5. Spiritual Overtones: By the way, the idea of a fallen world that needs to be restored has huge spiritual overtones.  A good gunslinger, who does not conform to “religion” as it is known rides out to confront and defeat a dark man.  Of course, creation itself  is at stake and must be rescued.  Sounds familiar to me.

6. The dark resurrection reminds me of Pet Sematary.

Mr. Vincent and Me: 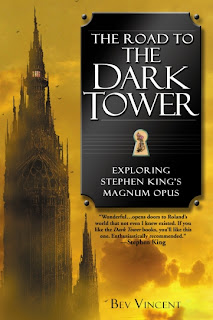 Wow, am I glad I have Bev Vincent’s “The Road To The Dark Tower.”  Vincent explains everything from a birds eye point of view, taking into account the entire series, changes King made to the Gunslinger and even discussing issues of chronology.

I have to admit, I was lost as the Dark Man raised Norton from the dead – simply in terms of where we were in the timeline.  I knew at some point the Gunslinger started talking, but then the scene changed and it was another flashback.  So it was a flashback in a flashback.   But, to make things more complicated – I wasn’t even clear where the Gunslinger’s conversation with the farmer fit in to all of this.

So Vincent explains the whole chronology thing succinctly, without making me feel stupid (though you all are welcome to point fingers and declare me unworthy of the journey!)  Vincent writes:


“The Gunslinger,” covers a period of nearly two months, taking the as-yet-unnamed gunslinger from Prince town through Tull and southeast into the desert, where he encounters Brown. . .

(AH!!!  How did I not put this together.  So even Brown is a flashback)


“Through a series of flashbacks, he reminisces about his recent history.”


See, now I get it!  In fact, now I’m excited about it.  What was that, four sentenses that made the whole first part of the novel flow.


“In Song of Susannah, King says he liked how the story seems to be going backward (I’LL SAY!), starting with Roland, slipping back to Brown, then to Tull and finally to show Nort the Weeedeater being resurrected by Walter.  “The early part of it was all told in reverse gear.”

(The quotes are from page 31 of the paperback.)

Finally, Vincent address the issue I’ve been harping on – one of PURPOSE.  Why must the gunslinger go to the tower?  “The gunslinger sues people and discards them after they’ve served thier purpose or if they stand in the way of his goal.  In the abstract, his actions are understandable.  Saving all of existence is surely worth sacrificing a few people.”

But, I must ask – when the gunslinger gets to the Dark Tower, does he make any real attempt to save all humanity?  Is that what happened?  And, is he not caught like Bill Murray in an eternal Ground Hog Day situation?  Be patient, the journey will answer these questions for me!  Will King ever give us a Dark Tower 8, where the Gunslinger finally reaches the Dark Tower and successfully restores things?

Isn't this basically what every Star Trek movie is about?