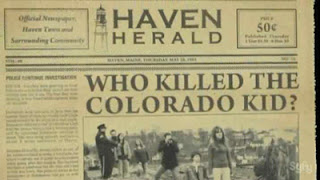 So how -- exactly -- is Haven related  to The Colorado Kid?  The show usually focuses on the towns  people and their oddities.  Really, this is the kind of town Carrie White would  feel right at home in.  The show has never given us an direct, on screen explanation of how it is connected to the Stephen King novel, or the larger King universe.

Danielle Turchiano at examiner.com has an article titled,  "Haven’ digs deeper into the Colorado Kid in its season three premiere."


Haven’s third season premiere, “301,” does not cheekily refer to its episode number but instead to a key landmark within the town—a burial plot in which the Colorado Kid was laid to rest years ago. By finding it and digging it up, Audrey may finally be set on the path to find out some real answers. Unfortunately for her, it’s just going to take a while to get there.

Turchiano promises, "The Colorado Kid case was referenced so often in previous episodes we were literally wondering when there’d finally be a new development or reveal in that, and we’re happy to say that “301” delivers in such a way in the last few minutes of the episode that it was more than worth the wait."

The full article is HERE.

Email ThisBlogThis!Share to TwitterShare to FacebookShare to Pinterest
Labels: haven, The Colorado Kid