Tales of the Cthulhu Mythos 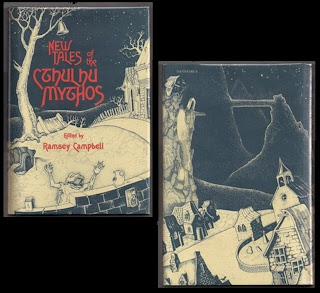 I saw this on ebay and thought it was interesting:
New Tales of the Cthulhu Mythos.  It is a compilation of 9 short stories, edited by Ramsey Campbell.

Some of the stories include:


On August 19, 1974, two police officers, alcoholic veteran Ted Vetter and newcomer Robert Farnham, are working the night shift in the London neighborhood of Crouch End. They are discussing the case of Doris Freeman, a young American woman who came in to report the disappearance of her husband, lawyer Leonard Freeman. Nearly hysterical, Doris' story involves monsters and other supernatural incidents.

She relates how she and her husband were looking for a potential employer's house in Crouch End, but as they did so, they became lost. As they continued searching, their surroundings started to change subtly and become infested by what appeared to be monsters and demons. Doris escapes with her life, but her husband is not so lucky, being consumed by some kind of hideous creature (possibly Shub-Niggurath, due to a reference to 'the Black Goat with a Thousand Young' made shortly before the creature's appearance).

Farnham dismisses the story as rubbish, but Vetter, who has worked in Crouch End for years, is not so sure, remembering a time previously when similar events happened before. He speaks of different dimensions and Crouch End being a place where the veil between our world and another more demonic world is at its weakest. The story ends with Farnham going out into the night, only to find that something is different about the area for him too. He is never seen again, and Vetter dies a few years later. The story ends by saying that people continued to disappear in Crouch End and sometimes are never seen again.