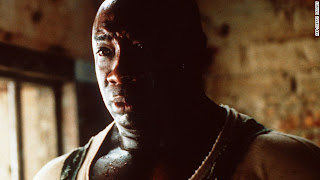 CNN has posted a great article  on Michael Clarke Duncan at cnn.com that  includes a "Duncan Through The Years" photo set that is nice.

The article reads, in part:

Most recently he was on the TV series, "The Finder," on the Fox network.

His co-star Mercedes Masohn tweeted: "Today is a sad day. Michael Clark Duncan passed away this morning. Known for his moving performance in The Green Mile. RIP MCD. You'll b missed."

and,  about The Green Mile the article says:


In the Oscar-nominated film, Duncan played John Coffey, the huge black man wrongly convicted in a Louisiana town for the rapes and murders of two white girls. Coffey has supernatural powers, though; his hands can heal, even bring back the dead.

A microcosm of faith, Coffey is a messenger of hope and lost hope who develops a relationship with Tom Hanks' character, a guard named Paul Edgecomb.

Film critic Roger Ebert wrote that Duncan's performance "is both acting and being." Ebert tweeted Monday that Duncan was "A striking screen presence."

Duncan was nominated for an Academy Award nomination for best supporting actor, which was won that year by Michael Caine for "The Cider House Rules."

Duncan was 54,  and had  been awarded BFCA Critics' Choice Award for Best Supporting Actor.  He will certainly be missed!