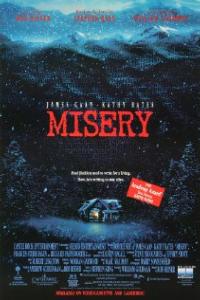 On the heels of a successful  Carrie run, Misery is headed to the stage at Bucks County Playhouse in New  Hope, Pa.

In a September 20 article in the New York times Patrick Healy wrote:


This fall Misery Chastain will live again, this time on stage: The theatrical division of Warner Bros. Entertainment announced on Thursday that it had developed a new play based on the original “Misery” novel by Stephen King that will run Nov. 24-Dec. 8 at Bucks County Playhouse in New Hope, Pa.

The script is by the two-time Oscar winner William Goldman, whom Warner Bros. recruited in Hollywood’s latest attempt at synergy between the film and theater worlds. Mr. Goldman previously adapted the King novel for the screen version of “Misery,” and won his Academy Awards for “Butch Cassidy and the Sundance Kid” and “All the President’s Men.”

I would love to see it!

I posted a short article about previous appearances of Misery on stage HERE at talkstephenking and HERE about a staged reading of Misery.  Obviously, Misery is a book that translates nicely not only to screen, but to the stage.

The times article is HERE.
There is another  interesting article about the play at broadwayworld.com