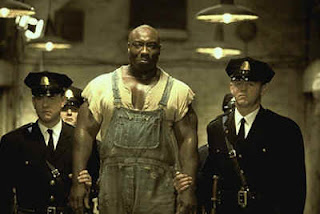 
Duncan starred in The Green Mile, giving a wonderful portrayal of John Coffey.  He was 6' 5" and nicknamed "Big Mike."  I like this line from the IMDb, "Raised by his single mother on Chicago's South Side, Michael Clarke Duncan grew up resisting drugs and alcohol, instead concentrating on school." (the IMDb bio is HERE)