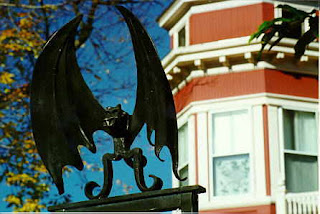 I liked Alice Anderson's post about Halloween Party Theme Ideas because it was so . . . (ready for this) literary.  A few of her ideas include: Characters from old England, such as Jack the  Ripper, Hunchback, Dracula, Dr. Jekyl.  How about The Nightmare Before Christmas, or H.P. Lovecraft.

Lovecraft must have gotten her thinking, because after  that suggestions he suggested Horror authors in general could be a theme of their own.  But what horror author  has produced enough recognizable work to rate an entire theme?  Why. . . Mr. King of course!  And,what's really neat, is right after King comes Mr. Poe.

Have your guests dress as a character from a Stephen King novel. Easy outfits would be Carrie, Pennywise, or the man in the black suit. With so many King novels on the shelves, there would be no end to the imagination of your guests. And by limiting the theme to one author, guessing the costume would be a little less tricky and a little more fun. Another great author would be Edgar Allen Poe or possibly a generic theme around the classic writings of horror.

Here. . . I'll have an imaginary Stephen King party.  Who are you coming as?