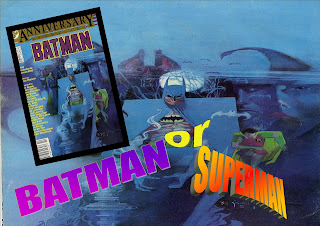 Batman #400 was issued October, 1986.  It features a special introduction by Stephen King.  King's topic of choice. . . Batman or Superman.

This special introduction its on inside front and inside back covers.

King writes: "When I was a kid there were certain questions which came up and had to be answered. . . or at least aired, if finding a conclusive answer proved impossible.

He then offers us a quick list of questions that had to be answered:

"These were questions asked and answered after you were too tired to swim out to the raft anymore and had to crash out on the beach, or when you were walking home from the baseball field in summer's sweet dusk with your feet burning inside your sneakers, or before you fell asleep on camp-outs."

Of course, this is exactly what we are treated to in the movie Stand By Me.  Questions kids ponder.  And. . . if Mickey is a mouse, Pluto is a dog. . . what's Goofy?

And then there was this question: Who do you like better, Superman or Batman?

Before I tell you King's preference -- I took an unofficial poll.  I discovered a little generation gap.  Teens and adults pretty quickly choose Batman.  Children were divided, but Superman was still pretty popular with the kiddos.  We, it turns out, are a house divided!  The nine year old was offended anyone would think Batman was better than Superman.  She had not considered that anyone might hold a varying opinion.

King's vote: Batman.  (Come on, no surprise there, right?  He's writing the intro in the Batman comic.  I guess he would have had to do some more soul searching if D.C. had asked him to write an introduction!)

He assures us that he still "digs" Superman, because he's the "good" guy.  However, King explains that Superman is a little removed from the rest of us.  He can't be beat!  There's Kryptonite, even red and yellow Kryptonite, but "Batman was just a guy.  A rich guy, yes.  A strong guy, granted.  a smart guy, you bet.  But. . . he couldn't fly.  I think that formed my preference more than anything else."

King discusses the first Superman movie, and the tagline, "You'll Believe A Man can Fly."  He didn't!  He didn't believe it in the movie or the comic books.  "Ironically, the closest I ever came to believing it was in the TV series."  Interesting!  I love that old TV series.  And so do my kids.  We've watched them all, over and over.  "DON'T CALL ME CHIEF!"

King says the Batman TV show was "unpleasantly campy."  I must agree!  I saw it recently, and it pained me.  But, the actors were awesome.  They were trying to make it feel like a comic book; but in that vein, the Dick Tracy movie leads the pack, I think.

"But when Batman swung down into the Joker's hideout on a rope or stopped The Penguin from dropping Robin into a bucket of boiling hog-fat with a well-thrown Batarang, I believed.  These were not likely things, I freely grand you that, but they were possible things.  I could believe in a Caped Crusader who swung on ropes, threw boomerangs with deadly accuracy, and drove like Richard Petty getting a pregnant woman to the hospital."

(He also says he had trouble believing in Super-breath.)

"He had to be a detective.  He couldn't rely on super-breath to return Gotham city to its proper place after the crime had happened; he had to catch The Riddler or whomever the villain might be before he could jump start those nuclear jets.  Like Sherlock Holmes, Batman looked at the tracks the crooks left; he took finger prints; he picked up hairs from the scene of the crime and took testimony.  He kept files -- also a la Homes -- on the modus operandi of various criminals. He searched for patterns, knowing -- as all the great detectives have -- that if a pattern can be found, you can be there waiting for the criminal at his next stop."

So what's really up, Mr. King?  What's the bottom line?

"Maybe the real reason that Batman appealed to me more than the other guy: There was something sinister about him.  That's right.  you heard me.  Sinister."

And this is where the article gets real sweet, my friends.  Because, remember, I love old radio, right?  And King now compares Batman to The Shadow.  I loved the shadow!

Batman, King says, is like a vampire -- because he is a creature of the night.  All the more a comparison, as we now know that Superman gets his power from our sun.  Thus, making Superman all the more a day creature, and Batman a night creature!

"Oh, yeah, you saw him fighting crime in the day once in a while, but mostly he was a shape in the shadows or a grim-faced man-thing crashing through a window at some small hour of the morning, his cape floating around him like a great shadow.  In those Batman-busts-in-panels, you almost always saw a horrid species of fear on the faces of the hoods he was about to flush down the toilet, and I always flet a strong sense of identity with those expressions.  yeah, I thought (and still do think), sitting under a tree in our backyard, or maybe in the tub, or on the john (or, as a kid, under the covers with a flashlight).  Yeah, that's right, they should look scared, I'd sure be scared if something like that busted in one me.  I'd be scared even if I wasn't doing something wrong."

As if to give great credibility to this line of argument, the last page of the comic -- the page facing this exposition of Batman, is a series of night scenes,w tih Batman's cape wavering around him.  The Bat signal flashes in the sky. . .

"The night was his time; the shadows were his place; like the bat from which he took his name, he saw with his hands and feet and ears.  as Bruce Wayne, he was cheerful poshy, full of savoir faire and bonhomie, a fellow easily imagined in front of the fire in his book-line library with a balloon glass of brandy and a bowl of Cheez Doodles near at hand.  But when the Bat-Signal floated against one of Gotham's skyscrapers (or perhaps the underside of a handy passing cloud) a grim and unsmiling creature emerged from the Bat-Cave.  You could shoot him and he would bleed. . . you could crank him a good one on the head and he would fold up (at least for a while ). . . but you could never, never stop him."

King closes by noting that Batman was on the rise (1986) and he writes:

"I'd like to congratulate the Caped Crusader on his long and valiant history, thank him for the hours of pleasure he has given me, and wish him many more years of heroic crime-busting.

Go get'em, Big Guy.  May your Bat-Signal never fall, your Batmobile never run out of the nuclear pellets it runs on your utility belt never come up fatally under-stocked at the wrong moment.

And please, never come busting through my skylight int he middle of the night.  You'd probably scare me into a brain hemorrhage. . . and besides, Big Guy, i'm on your side.
I always was.
--Stephen King"

I'll weigh in on my opinion -- Batman or Superman -- in the comments section, and invite you to do the same.

Question is: WHO DO YOU PREFER, BATMAN OR SUPERMAN?